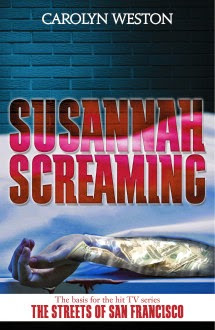 It’s the turbulent 1970s, a time of social upheaval. University-educated ex-surfer Casey Kellog is the youngest homicide detective on the force. He’s teamed up with Al Krug, an older, tougher, street-wise cop resistant to change. Their latest case involves a vicious hit-and-run death: a driver in a Mercedes chases a motorcyclist, hits him, and then backs up over him again, making certain that he’s road kill. The investigation takes a bizarre turn when the victim is undressed in the morgue and the two cops discover that his corpse is plastic-wrapped in twenty-dollar bills…

There’s a lot to like in this re-published 1975 book from Carolyn Weston…….length, pace, plot, characters and setting.

We have a cop team - Krug – older, suspicious, cynical, jaded….and Kellog  - younger, fresh, idealistic, more open but not naive. As Weston’s books spawned the TV series – The Streets of San Francisco – it was easy for me to picture a fresh-faced Michael Douglas and a grizzled, schnozzle-faced Karl Malden, whilst reading. The TV series ran from 1972 until 1977, petering out after Douglas left the show in 1976. 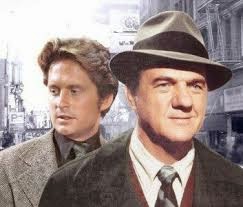 We have a vehicular homicide and a witness. Our witness is a new kid in town – Paul Rees. Suspicion quickly falls on him as he is a parolee with a few secrets he would rather not disclose to the cops. His initial half-truths, evasiveness and outright lies, soon have him as public enemy number 1 in Detective Krug’s eyes. Our dead male has a large amount of counterfeit cash cling-filmed to his torso. Krug is adamant that Rees is part of a gang of forgers that the FBI have been chasing for a while and not as he claims an innocent witness.

Rees meets the other witness to the homicide, an attractive woman – Susannah Roche for a coffee and a subsequent date involving a meal before she spends a few hours in his motel room. Susannah shortly after returning to her apartment plunges from her 10th floor window to her death.

Roche’s death so soon after sex with Rees reinforces Krug’s conviction that Rees is involved. Kellog is less convinced. Our second half of the book sees Rees becoming increasingly panicked as the police seem to be focusing on him. He starts trying to unpick the net that seems to be closing in on him. With the gang leader eliminating partners for a larger cut of the pie, Rees with his parolee status is the ideal fall guy.

Great action, great characters, great dialogue, an interesting puzzle, a fast pace and not over-long. Pretty much a perfect read at 220-odd pages. 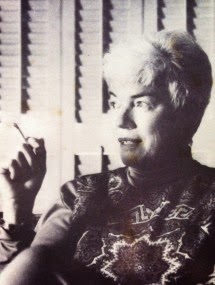 Carolyn Weston’s 1972 book Poor, Poor Ophelia was the first Casey Kellog book and inspired the pilot which eventually morphed into The Streets of San Francisco. There was a third book in the series – Rouse the Demon (1976). Brash Books have re-published the first two and Demon will appear shortly.

My thanks to them for putting this one up on Net Galley.