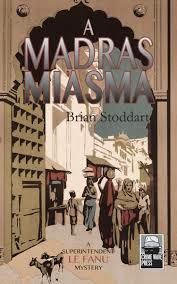 Madras in the 1920s. The British are slowly losing the grip on the subcontinent. The end of the colonial enterprise is in sight and the city on India’s east coast is teeming with intrigue. A grisly murder takes place against the backdrop of political tension and Superintendent Le Fanu, a man of impeccable investigative methods, is called in to find out who killed a respectable young British girl and dumped her in a canal, her veins clogged with morphine.

As Le Fanu, a man forced to keep his own personal relationship a secret for fear of scandal in the face British moral standards, begins to investigate, he quickly slips into a quagmire of Raj politics, rebellion and nefarious criminal activities that threaten not just to bury his case but the fearless detective himself.

The first Detective Le Fanu Adventure, A Madras Miasma, tells a classic tale of murder, corruption and intrigue with a sharp eye on British colonial politics and race relations. It is a story that, like its main protagonist, has its heart firmly in the right place.

Praise for A Madras Miasma:

"As one would expect from a distinguished Australian academic who has written and lectured on the subject of Indian history, the background is effortlessly convincing. In Le Fanu, Stoddart has created a character with huge potential for development, both as a person and as a witness to momentous historical events. In purely technical terms, the plotting of the book is as impressive as the narrative style, and the description of the bloody end to the industrial protest is as gripping as anything I have read in a long while. The ending is very clever without being showy, and I will certainly be on the lookout for the next chapter in the career of Christian Jolyon Brenton Le Fanu, MC." - Crime Fiction Lover blog.

Brian Stoddart’s debut novel takes us to India after the First World War. India is fast approaching a period of upheaval and change as the fledgling nationalist movement starts agitating for reforms and a greater say in their own affairs. The Colonial masters are resisting. A dead European woman is discovered in a canal.

I have to be honest and say that I approached the book with a small bit of hesitation as I’m more used to reading books with a more contemporary setting. After maybe 10 pages, my doubts were dispelled as Stoddart’s main character, Detective Le Fanu and his back up, Sergeant Habibullah quickly drew me into this tale of murder with the subsequent investigation and life in 1920’s Madras.

Le Fanu, our lead is a veteran of the Great War and is the most interesting character I’ve spent time with this reading month. He possesses an inherent decency; a trait particularly apparent in his dealings with Habi, his underling – a Muslim policeman who he treats almost as an equal. The unevenness emanating solely from the difference in their ranks, rather than anything related to colour or religion.  The contrast with most of the European elite, with their casual racism couldn’t be starker. Life amongst the business community and ruling classes mainly revolves around cricket, golf or drinks at the club whilst furiously gossiping and complaining about everything, particularly Le Fanu and his pressured boss, Inspector-General Wilson.

I’m reluctant to elaborate too much on the story, I’d rather recommend you read it yourselves. It ticked every box for me. Setting, characters, mystery, pace, resolution – all spot on.

Stoddart’s depiction of Madras and his portrayal of the disparity in circumstance between the local inhabitants and the elite was fascinating. It’s a city where few secrets can be kept, and the gossip spreads faster than the traffic.

Le Fanu, Habi, Arthur Jepson, Wilson, Ro, Virginia Campbell - interesting characters all of them and strong support for Le Fanu. Some of the scenes where Jepson and Le Fanu interact and where Le Fanu encounters Campbell in the early stages of the investigation are humourous and inject some light relief without ever reducing the narrative to comedy. They were a lot of fun to read and I would imagine fun to write.

The investigation as it unfolded was enjoyable to follow and credible. The author balances the pace superbly, getting us to the final destination quickly enough, but with time to enjoy the scenery on the way; providing us with details of Le Fanus’ past and present and a possible glimpse of his future, as well as offering a view of a fascinating time in India’s history.

The good news is - there is a second Detective Le Fanu book on its way soon – The Pallampur Predicament. 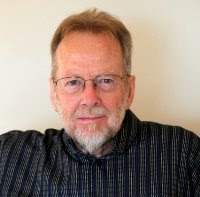 Many thanks to author Brian and Emily at Crime Wave Press for sending me a copy of this for review. Crime Wave are a small publishing house located in Hong Kong. They mainly concentrate on mysteries with an Asian flavour, but I believe are extending their scope in the future. Their website is here.

Brian Stoddart is an Australian academic with about 15 non-fiction books to his name. There’s a brief author biography on Crime Wave’s site. Click here.