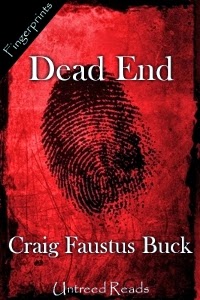 Johno Beltran is a former homicide detective who fell from grace when a stupid mistake allowed a rich, sadistic sex killer to go free. When the notorious murderer drives into the restaurant parking lot where Johno now works as a valet, their reunion leads Johno down a dark, twisty road toward a deadly collision between paranoia and reality. A short story.

Another new author and although this is only a story story I think I'm going to enjoy reading Mr Buck in the future.

I arrived here by way of a hop, skip and a jump, or six degrees of separation for books.

Kakonis has been brought back into the sunlight after years hidden away by the chaps - Lee Goldberg and Joel Goldman at new kid on the block publisher - Brash Books.

Liking the sound of this one, I thought I would see whether Buck had written anything else.

Well he has - there's a novella intriguingly titled Psycho Logic which I have now ordered.

Dead End is the Anthony Award nominated short story (winner announced in November), that introduces us to John Beltran - the main man in Psycho Logic.

Back to Dead End then - 16 pages bang, I'm hooked. Within this short time frame of narrative, Buck sucked me in, ratcheting the tension up, before unleashing a finale which, whilst bringing closure of sorts to one of our participants has just ensured that John Beltran's already crap life has just taken a helluva turn for the worse.

Have you ever watched the scary movie where the kids are exploring the village weirdo's empty house, when the occupant comes home and one of them remains trapped inside and the psycho smells something is amiss - the one's where you watch from behind the sofa, peering through your fingers - Buck did that to me.

Acquired on Amazon UK for kindle earlier this month.