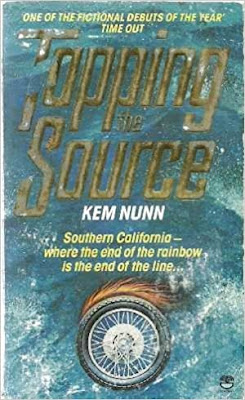 Synopsis/blurb ....
Sometimes the only way to understand evil is to plunge into it headlong - and just pray you don't drown.
People come to California's Huntingdon Beach in search of the endless party, the ultimate high and the perfect wave. Ike Tucker came looking for his vanished sister - and for the three men who might have murdered her.
In that place of gilded surfers and sun-bleached blondes, Ike looked into the shadows. He found parties that drifted towards pointless violence and joyless violations, highs that he might never come down from - and a sea of old hatreds that was wilder, deeper - and deadlier - than the ocean.
'Unique, colourful, suspenseful and mysterious. A very fine writing debut.'     Joseph Wambaugh
I first read this book maybe thirty years ago and decided it was a keeper. While details of the book have vanished from my memory over the years, and indeed probably in the month or so since I read it for a second time, there's an affection, connection and power that keeps me attached to the book.
Innocent boy, plunges headlong into darkness in search of some answers to his sister's disappearance, gets temporarily corrupted and just about escapes intact, scarred and probably a lot older than his years. I'm instantly reminded of Newton Thornburg's fantastic book, To Die in California, where hick farmer David Hook ventures into the belly of the beast for answers to his son's alleged suicide.
Nunn writes fantastically about the ocean, its power and moods, the attraction of its dangerous swells, the mastery of the surfers trying to temporarily conquer it. I'm incapable of articulating just how beautiful and powerful his writing is. You feel as if you are present and part of the scene. Haunting and totally mesmerising.
In addition to the depiction of the sea and the whole surfing culture, there's also the town of Huntingdon Beach itself ... a magnet for waifs and strays, not sure what they are looking for but finding something - drugs, joyless sex, victimhood, exploitation and in the case of Ike Tucker's sister something more permanent. The town attracts newcomers like a bright, shiny jewel, but behind the facade lies sleaze and decay and bitterness and loss and violence and pain.
There's a counter-culture to the surfers with an opposing biker set, and a rivalry founded in another death. Preston, a biker. Hound, a surfer. Both affected by the death of Hound's sister years ago. Former brothers, now enemies. With Ike, they are the three focal points of the novel. At different times Ike gets close to both, still seeking his answers, still ignoring the warnings and the danger.
I was really swept up in the story. I feared for Ike, as he uncovered the history between Preston and Hound, I almost felt bereft and definitely incredibly sad at how things soured between the pair. At one time almost kings of the world they lived in.
Kings fight, the sun sets and rises, the world moves on, sometimes the players do, sometimes not.
I've seen this one described as a cult classic. I do know it's an absolute belter of a book. Hard to do it justice in a review.
5 from 5

I have more from Nunn on the pile and I'm pretty sure I've tried more of his books in the years after this one. I'm almost tempted to say this debut reached heights that his subsequent work never quite did, but until I've read or re-read Unassigned Territory, Pomona Queen, The Dogs of Winter and Tijuana Straits that would be harsh.
Read - March, 2021
Published - 1985
Page count - 320
Source - owned copy
Format - paperback
Posted by col2910 at 06:27