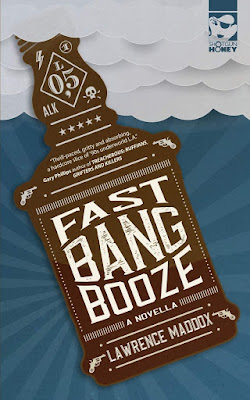 Synopsis/blurb ...
After seeing Frank deliver an impressive ass kicking in a bar fight, Russian mobster Popov hires him to be his driver. What Popov doesn’t know is that when Frank is sober, he’s inhumanly fast, deadly, and mute; when Frank is on the sauce, he’s a useless twenty-something wiseass.
Double-crossed in a drug deal gone bad, Frank and Popov have one night to recover their stolen cash or get wiped off the map. Frank’s special abilities put him in the spotlight, and he struggles to keep it all together as Calendar, a dangerous Latina model, and Janie, a burgeoning love interest, go along for the ride.
Fast Bang Booze is a beat-the-clock thrill-ride that races through 1993 Los Angeles to a rollicking, deadly climax.
Praise for FAST BANG BOOZE:
“Lawrence puts you right in the middle of a dangerous world full of seedy characters, sex, drugs and non-stop action without ever losing his grip on his incredible attention to detail and humor. I couldn’t put Fast Bang Booze down and I can’t wait to pick up his next one.” —Greg Garcia, creator of My Name is Earl, Raising Hope, and The Guestbook
Plenty of bang for my buck here with a fast-paced action-packed offering from Larry Maddox. All the ingredients that I like in my fiction were present..... outsiders, criminals, a drug deal, Russians, a rip-off, a double cross, a foxy female, a recovery mission and action galore... bar fights, shoot-outs, car chases and more.
I liked the main character, Frank. I liked the quirk of character, metabolism or genetics the author imbued him with. Sober - he's a fighting dervish and and a drooling mess who can't string a sentence together. Drunk - he's an articulate charmer but can't punch his way out of a paperbag.  There was a lot of scope for fun in this one where his sobriety and capabilites never seemed to be what was appropriate for the situation he found himself in.
Great fun. A good time was had. Another winner from publisher Shotgun Honey.
Lawrence Maddox is an author to keep an eye on. 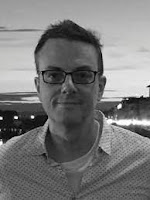