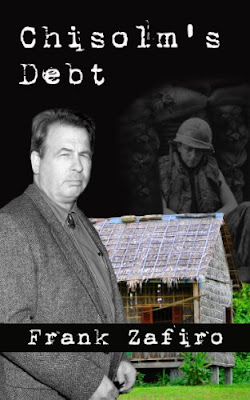 After two tours in Vietnam and 25 years as a police officer, Thomas Chisolm is looking forward to a quiet retirement. That hope is quickly shattered when Mai, a ghost from his past, finds him and demands justice for the horrors she suffered during the Vietnam War...horrors Chisolm couldn't save her from. Now Chisolm must find the man responsible and bring him to justice to repay an old debt and in the hopes of putting his own demons to rest...once and for all.

Chisolm's Debt is written by River City author Frank Zafiro and features one of River City's most iconic characters. Follow Chisolm on his search as he explores the nature of moral debt, war, forgiveness, and guilt on his way to an explosive ending.

Way back when, before I discovered the joys of crime fiction, I was a massive reader of all things related to the Vietnam War, both fact and fiction. Reading a book which was a blend of both was for me then a double win.

Chisolm's Debt serves up a dual time narrative, with newly retired police officer Frank Chisolm featuring both back in the 70s as a grunt in Vietnam and in near present day as he is emotionally blackmailed into tracking down a fellow US veteran responsible for the rape of a young Vietnamese woman.

I thought the re-emergence of the same woman, Mai from Chisolm's past, the one he tried his best to save but failed was a slight stretch for me plot-wise, but that said I really enjoyed the story.

The scenes set in Vietnam were tense and troubling ....... young men - barely men, thrust into an alien environment and landscape, trying their best to survive, some thrive, some become dehumanised and view everything and everyone as an enemy to be conquered. Friendship, loyalty, trust, camaraderie, bravery, duty, loss, a sense of right, contrasts with savagery, barbarism, cruelty, rape, entitlement, and a total abandonment of decency.

In the early 2010s we have the reconnection between Chisolm and Mai and Chisolm's subsequent search for the rapist veteran. This part of the narrative was enjoyable also. I liked the way Chisolm went about his task, utilising organisations with access to information on former serving members of the armed forces. I liked the less than straightforward path to his target, with some interesting events and diversions which this threw up.

Inevitably we get to a confrontation between Chisolm and the guilty man. It's less of a surprise to learn that time has not improved the demeanour or outlook of the rapist. He's a miserable, embittered man with little or no redeeming qualities. There's a skewed sense of pride in his boasting of showing his victim probably the best time of her life.

Events take a further twist and reinforce the portrayal thus far of Chisolm's character as a decent man, brave, tenacious and determined; one imbued with a strong sense of right and wrong. Again, there's a wee suspension of disbelief as Chisolm, a man in his 60s belies his age to perform some physical feats way beyond the ken of most normal beings half his age.

Overall though, I really liked it.

Frank Zafiro's books have been enjoyed before, In the Shadow of El Paso and The Hardest Hit (a YA novel as Frank Scalise) and a couple of his co-authored works with Colin Conway - Charlie 316 and Never the Crime. He's one of my best reading discoveries of 2020. 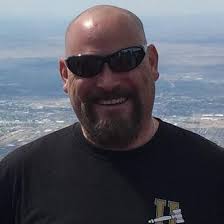