A bit of a mixed bag this month with some more literary elements along with the usual bag of crime....

Carson McCullers - The Heart is a Lonely Hunter (1940) - charity shop purchase
I think I've picked up and put back down this book more times over the past twenty years browsing in book and charity shops than any other book.
Beauty, compassion, tenderness ...... I think we could all do with a bit more of that in these difficult days....
Synopsis/blurb....
With the publication of her first novel, THE HEART IS A LONELY HUNTER, Carson McCullers, all of twenty-three, became a literary sensation. With its profound sense of moral isolation and its compassionate glimpses into its characters' inner lives, the novel is considered McCullers' finest work, an enduring masterpiece first published by Houghton Mifflin in 1940. At its center is the deaf-mute John Singer, who becomes the confidant for all various types of misfits in a Georgia mill town during the 1930s. Each one yearns for escape from small town life. When Singer's mute companion goes insane, Singer moves into the Kelly house, where Mick Kelly, the book's heroine (and loosely based on McCullers), finds solace in her music. Wonderfully attune to the spiritual isolation that underlies the human condition, and with a deft sense for racial tensions in the South, McCullers spins a haunting, unforgettable story that gives voice to the rejected, the forgotten, and the mistreated -- and, through Mick Kelly, gives voice to the quiet, intensely personal search for beauty.
Richard Wright praised Carson McCullers for her ability "to rise above the pressures of her environment and embrace white and black humanity in one sweep of apprehension and tenderness." She writes "with a sweep and certainty that are overwhelming," said the NEW YORK TIMES. McCullers became an overnight literary sensation, but her novel has endured, just as timely and powerful today as when it was first published. THE HEART IS A LONELY HUNTER is Carson McCullers at her most compassionate, endearing best. 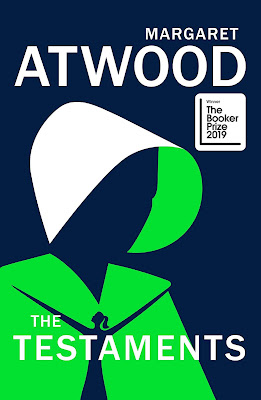 Margaret Atwood - The Testaments (2019) - purchased copy
I'm a massive fan of the TV adaptation of Atwood's The Handmaid's Tale. I hope to enjoy both the first book of the same name and this sequel, before too long. Definitely before another series airs on the box. I think one was in the pipeline but has been delayed due to Covid.
Synopsis/blurb...
WINNER OF THE BOOKER PRIZE FOR FICTION
More than fifteen years after the events of The Handmaid's Tale, the theocratic regime of the Republic of Gilead maintains its grip on power, but there are signs it is beginning to rot from within. At this crucial moment, the lives of three radically different women converge, with potentially explosive results.
Two have grown up as part of the first generation to come of age in the new order. The testimonies of these two young women are joined by a third: Aunt Lydia.  Her complex past and uncertain future unfold in surprising and pivotal ways.
With The Testaments, Margaret Atwood opens up the innermost workings of Gilead, as each woman is forced to come to terms with who she is, and how far she will go for what she believes.
The Testaments is a modern masterpiece, a powerful novel that can be read on its own or as a companion to Margaret Atwood’s classic, The Handmaid’s Tale. 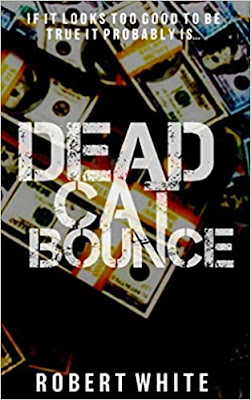 Robert White - Dead Cat Bounce (2019) - purchased copy
Billy bargain direct from publisher - Fahrenheit Press
Synopsis/blurb...
Old Mrs Bello lived above the family grocery store all her life, she worked hard, was frugal and lived an ordinary life. There was one thing that people knew about Mrs B though - she absolutely didn’t trust banks.
When she died at the age of 88 there was only one question on everyone’s lips – what happened to the family money?
Despite frantic searching from her surviving relatives, not a single cent was ever found and the missing family fortune passed into local legend.
Butchie Parmenter doesn’t believe in legends.
Experience has taught Butchie not to believe in anything except himself, so when good fortune unexpectedly lands at his feet he grabs the opportunity with both hands, determined not to let go. No matter what.
Butchie should have figured that nothing worth having ever comes easy and if something looks too good to be true, it usually is. 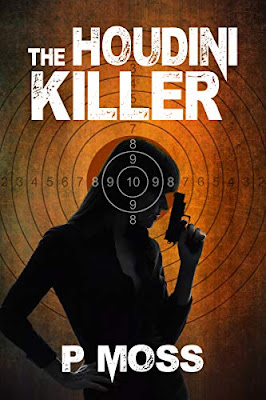 P Moss - The Houdini Killer (2020) - review copy received
Confession time, P Moss is one of those authors whose books I buy but never seem to ever actually get around to reading..... Vegas Knockout, Blue Vegas - I'll break my duck this time around!
Synopsis/blurb....
WHEN THE KILLER BECOMES THE TARGET
Competing for headlines with notorious serial killer Son of Sam in 1977, twenty-three-year-old Evie Eastway escalates her vigilante murder spree and is dubbed the Houdini Killer by the tabloids because of her uncanny ability to avoid capture. While Son of Sam is feared, Hero Houdini graffiti begins to appear all over New York City after Evie pulls the trigger on a Wall Street banker who looted a blue-collar pension fund. As Evie's lust for blood and headlines intensifies she falls in love with the police lieutenant in command of the task force assigned to capture her, but keeping him from discovering her secret proves difficult and it is not long before she finds herself in the crosshairs of an explosive showdown. 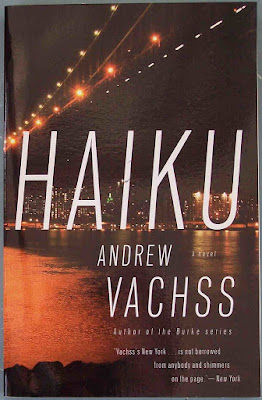 Andrew Vachss - Haiku (2009) - purchased copy
Sometime late 80s/early 90s I discovered Andrew Vachss and his crime fiction series featuring Burke and I was rapt. He was one of those authors whose books I bought when they came out, even if it meant a trip to London and the Murder One Bookshop on Charing Cross Road. I absolutely loved the hard-boiled series about an off the grid righter of wrongs. Somewhere in the past twenty years I kind of got distracted from reading Vachss even though I had never stopped enjoying his books.
Time to see if he still possesses the magic to hook me.
Synopsis/blurb.....
From the author of the acclaimed Burke series: a searing new novel that follows a band of homeless outcasts on a mission to recover what each has lost.
Ho is an ancient sensei who began training as a child, until war changed him forever. When his dismissive arrogance causes the death of a student he called 'daughter,' Ho renounces not only his possessions but also his role as master, roaming the streets of an always-cold city in search of a way to atone. As if magnetized, a group slowly forms around him: Michael, an addicted gambler who finally lost himself; Ranger, a psychotic Vietnam veteran for whom reality is an ever-revolving door; Lamont, once a fearless street-gang warlord who degenerated into hopeless alcoholism when the literati who discovered his poetry discarded him; Target, a relentless 'clanger' who speaks only by echoing speech sounds; and Brewster, an obsessive collector of 1950s 'hardboiled' paperbacks whose stash is housed in an abandoned building even vermin avoid.
Late one night, Michael spots a woman in a white Rolls-Royce throwing something into the river. Convinced that the woman is a perfect blackmail target, he attempts to recruit the others to search for her. But what transforms a halfhearted effort into a mission is the news that the building housing Brewster's 'library' is slated for demolition. Knowing that Brewster could not possibly survive such a loss is enough to bring them together in a search for the ultimate problem-solver: money.
Each frantic knock opens another barred door as demolition draws nearer. And the answers to each man's questions trigger shocking explosions that hit you with all the visceral power we have come to expect from this fierce and dynamic writer. 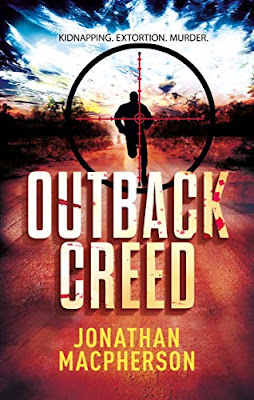 New-to-me author and a speculative punt in the dark, though at under a pound not too much of a risk taken. I like Aussie set crime fiction, I like the premise of the book and it's not over-long at less than 200 pages.

An intense thriller, loaded with action and shocking twists you will not see coming.

A lawyer vacationing in the outback becomes a target in a high-stakes conspiracy.

Lawyer Tom McLaren makes a trip to the outback, where he hopes to talk an Aboriginal community into giving up their land to his client, a mining magnate. Negotiations prove difficult and lengthy, and Tom and his colleagues take a weekend trip deep into the outback, where they hope to get some fresh ideas.

To their horror, they become caught in a dangerous altercation with a deranged gunman, and their trip soon becomes a nightmare.

The men are forced to flee separately. Tom is fortunate enough to be accompanied by an Aboriginal boy, who guides him safely into a small town. There, Tom learns of a conspiracy involving the mining company, and both he and the boy become targets.

The mastermind behind the scheme remains an enigma. What is clear is that crooked cops and a deadly assassin are on the payroll, and they will stop at nothing to see the job through and eliminate all possible witnesses-including Tom.