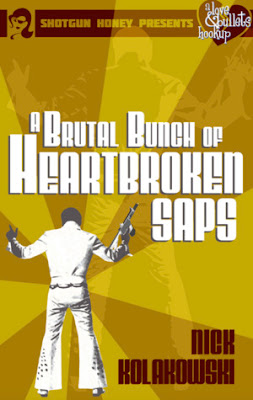 Bill is a hustler’s hustler with a taste for the high life. He pulls off big scores for one of New York City’s more vicious gangs…until he suddenly grows a conscience. However, living the clean life takes a whole lot of money, and so Bill decides to steal a fortune from his employer before skipping town.

With a bag of cash in the trunk of his car, Bill heads west, ready for a new life. But all that money makes him a tempting target for some bad people he meets on the road—and if that wasn’t dangerous enough, some old friends are close behind him, and they intend to make a trophy of his head.

Pursued by crooked cops, dimwitted bouncers, and a wisecracking assassin in the midst of a midlife crisis, Bill will need to be a quick study in the way of the gun if he wants to survive his own getaway. Who knew that an honest attempt at redemption could rack up a body count like this?

A Brutal Bunch of Heartbroken Saps is a gonzo noir journey into obsession, violence, and the power of love.

Praise for A BRUTAL BUNCH OF HEARTBROKEN SAPS:

“Dark, bleak and in-your-face, take-no-prisoners prose, everything you want in crime fiction.” —Frank Bill, author of Donnybrook and Crimes in Southern Indiana.

More than a touch of the absurd as Bill, a hustler rips off his mob bosses and makes a dash for freedom. Before too long, his plans are in ruins - his accomplice nailed and his intended bolt-hole screwed. On his tail an assassin and Fiona, the girl he's just walked out on.

Things can't get any worse, unless he suffers car-trouble and rocks up in a small town, with a corrupt sheriff and a gang of cohorts, who specialise in ripping off strangers and making them disappear - a kind of tourist tax with no comebacks.

Fortunately, Fiona is the forgiving type and our assassin is a sucker for an Elvis suit and some Burning Love. There just might be a future for our couple of lovebirds, but there's going to be a lot of blood spilled in the meantime.

Larger than life characters, plenty of pace and action, a love story with a grenade and some automatic rifles, as well as some amputated digits. An OTT finale which was fitting for this one-sitting read.

My first time with Nick Kolakowski, but definitely not my last. 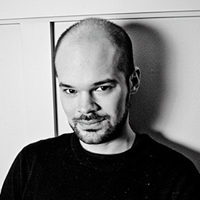 Nick Kolakowski has a collection of short stories out - Somebody's Trying to Kill Me and his second Bill and Fiona tale drops at the end of this week - Slaughterhouse Blues.