QUESTIONS AND ANSWERS WITH DAVID YOUNG 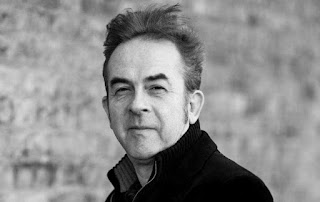 David Young, author of A Darker State and the two earlier Karin Muller books - Stasi Child and Stasi Wolf answers a few questions on the blog.

Yes it’s full-time. I started an MA in Creative Writing (Crime Fiction) at City University in 2012, doing it in the evenings around my day job at the BBC as a news editor. I’d been with the BBC for more than 25 years – too long -- and it was a deliberate attempt to escape. In my final year of the MA, I took voluntary redundancy from the day job, and that cushioned the transition.

I believe A Darker State is the third book in your series after Stasi Child and Stasi Wolf, can you tell me a bit about the two earlier books?

All three are set in the 1970s in East Germany and feature my main character Karin Müller and her deputy Werner Tilsner, who both work for the criminal division of the People’s Police. The books are part police procedural, part historical novel, part action thriller – so a bit of a hybrid. But as well as the traditional crime story, the East German secret police – the Stasi – are in the background pulling the strings. Although it’s a series, each is a separate story – so you should be able to dip in at any point in the series, and then go back and read the earlier books.

Have you had anything else published to date?

About 15 years ago I self-published a crime thriller set on the Isle of Wight under a pseudonym. I enjoyed the process, and sold the entire print run of 1,000 copies. But it was exhausting, and impossible to continue with alongside a day job.

How long from conception to completion and publication did A Darker State take?

That’s a difficult one to answer. I had the germ of the idea at the time we sold Stasi Child, but didn’t really start developing it until a couple of years later. Once I’d planned it out, writing the first draft was fairly rapid, as that’s the way I prefer to work. At one stage, I wrote 45,000 words – so half the novel – in just five days. The re-writing and fine-tuning took a lot longer!

It was pretty much what I planned, but my original editor left soon after reading the first draft (not because of it, as far as I know!) so the change to a new editor slowed the process. But the advantage was I got two lots of input and expertise.

I tend to write my first drafts quite quickly, so I don’t really have a typical schedule. When I’m in the zone, I can write up to 10,000 words a day – and on those days I’ll work 16-hour days. But I spend other times of the year editing, researching and promoting. So it varies with the seasons. 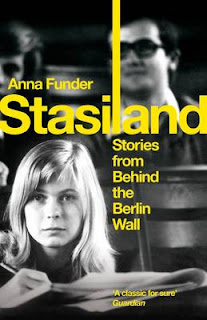 Was your latest book, an easier book to write than your first novel?

It’s possibly slightly easier once you’re into a series in that you don’t have to recreate the world, you’re just fine-tuning it. But at the same time, you’re trying to improve with each book. That’s a difficult target.

Do you have a connection with the divided Germany of the 70s? I’m interested to know what the spark that was that set you off writing in this time period and setting.

Not really, other than a reporting trip to cover one of the big NATO exercises of the 1980s in West Germany for an evening newspaper in South Wales I was working for at the time. The spark was slightly weird. To let off steam from the day job, I started a little indiepop band, and we blagged a tour to Germany in 2008. Most of the venues that booked us were in the former East – that’s where the idea came from. That and reading Anna Funder’s Stasiland between gigs.

Did you have to do an inordinate amount of research prior to embarking on the writing of this series?

I do a lot of research, but really enjoy that part of a writer’s life. For each novel, I’ll tend to do at least two research trips to Germany, plus countless hours on the internet. I’ve also been learning German as when I started out I could hardly speak any, and I’m not much better even now.

I’ve the follow-up to the self-published Isle of Wight novel, but I very much doubt it will ever see the light of day.

I’m just about to embark on a rewrite of Book 4 in the series. It’s a fictional extrapolation of a real-life WW2 massacre and how it impinges on the present day of my East German world – ie the mid-to-late 70s. The first-person voice is through the eyes of an inmate at the Mittelbau-Dora labour camp – where V1 and V2 rockets were made. That narrative is very harrowing – but is totally based on real-life accounts. Hopefully that hasn’t given too much away, or put too many people off!

I think I read somewhere you have five titles planned in the series, will that be a definitive end point or is there scope for further adventures with Karin Muller?

As with any series, its future depends on readers buying the books. I’d like it to run and run. There’s no shortage of inspiration from real-life East German tales. Ideally, I’d like to see the series through to 1989 or 1990 to see how Karin fares when the Wall is torn down. But so far, I’m contracted for the five books.

Researching and then creating the world in your first draft.

For me, editing and rewriting. I know it’s vital, but I don’t enjoy it.

My Little Eye by Stephanie Marland (highly recommended), The History of the Dora Camp by André Sellier, Death Marches by Daniel Blatman, Solitaire by Jane Thynne, and Tokyo Vice by Jake Adelstein.

I don’t read as much as I should and don’t confine myself to crime fiction. In the crime genre, my favourite author is probably William Ryan for his Korolev series.

Alone in Berlin by Hans Fallada.

Supporting Hull City but recently it’s become less and less enjoyable because of the club’s owners and their disregard for the fanbase. 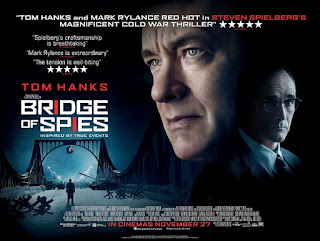 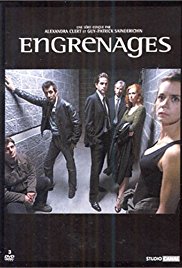 TV addict or not? What’s the must watch show in the Young household?

Addict. Spiral/Engrenages – the French crime series – is my favourite.

My aim is to have a couple of series on the go, one under a pseudonym. But perhaps a lesser ambition would be to simply still earn a living from fiction writing – and I suspect that will become more and more difficult. Bloggers like yourself and your readers are vitally important in supporting authors so thanks very much for this interview