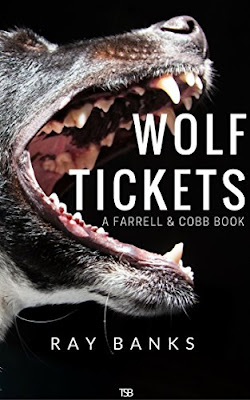 Sean Farrell - small-time thief, petrol smuggler and all-round scoundrel - just got shafted by the love of his life, Nora. She took his twenty grand, his coke and his favourite leather jacket; she left him with little more than a hangover and a Dido song to remember her by.

Now Nora's sights are set on the two hundred grand buried somewhere in the Northumberland countryside, and she's enlisted the help of the most dangerous man in Dublin to find it. Farrell hooks up with old Army pal - the shoplifting, rotgut-swilling arsonist Jimmy Cobb - to beat them to the punch. Because nobody gets in the way of Sean Farrell and money.

Probably getting on for ten years since I picked up a Ray Banks book and more fool me I reckon.

Banks doesn't do cozy, Banks offers hard, brutal, world-weary men with little interest in a straight life, but barely enough energy to make a success of whatever criminal activities they may turn their hands to.

Wolf Tickets brings together a couple of ex-army comrades who have gone their separate ways, a parting brought about by a woman, Nora. Farrell wakes one morning to find Nora gone, along with his money and his one of a kind leather jacket. Nora might be in Jimmy Cobb's neck of the woods - Northumberland and Farrell's coming a-calling.

We get some of our twosomes history - tales of scrapes fought on foreign turf, down in London, as well as a violent, alcohol fuelled trip around the North-East trying to recover the missing money and find the gal. Our gal gets found, but no longer breathing.

Farrell and Cobb, trying to stay one step ahead of the law, endeavour to track down an ex-con Frank O'Brien. Farrell, O'Brien and Nora have a tangled history, one he has neglected to inform Cobb about. With a wheelchair-bound dope dealer and his heavies to deal with and the pair dependent on a homeless alcoholic for information, our boys have to go all out - full throttle ballistic to get to their target. They'll be enduring a fair few licks themselves in their quest.

Did I say this was violent? Torture scenes, beatings and injury. Sometimes off-set with comedy - Cobb, our Geordie tough guy, survives a near-death experience at the hands of O'Brien - almost a night of a thousand cuts virtue of a stanley knife. What better way to try and close the wounds than a packet of children's cartoon plasters festooned all over his boat race?

I did get more out of this than just a brutal tale of revenge and an evening up of the score. The dynamics of the relationship between Farrell and Cobb are interesting. Yes they have each other's backs, but there's quite often friction, disappointment and a barely suppressed resentment between the two. Our boys may also be lacking in some social niceties, but their loyalty to each other is commendable. 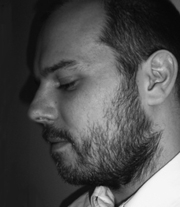 In the pre-blogging days, I've enjoyed The Big Blind, Saturday's Child, Donkey Punch and No More Heroes. I've missed out on five or six from him afterwards.