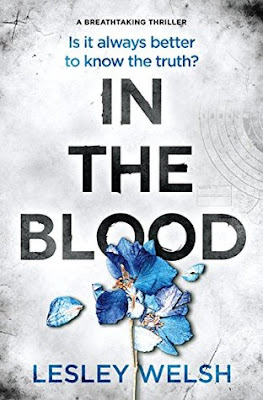 Are you looking for a breathtaking crime thriller full of shocking twists? Then try the gripping and unmissable In The Blood.

Grace Dobbs, a champion at her local gun club, lives a quiet life in Western Australia with her mother.

But when a violent killing spree in the neighbourhood sees Grace come to the rescue, she is catapulted into the limelight as a local heroine.

However, her fame spreads much further than the local town, bringing her to the attention of someone in Britain who is very keen to meet her.

But what does this person want? And can they be trusted?

As Grace travels to England to discover her true heritage, she is about to learn the real meaning of danger.

Lesley Welsh is the author of The Serial Killer's Daughter and Truth Lies Buried. In The Blood is her final novel and is published posthumously by Bloodhound Books. Her books will appeal to fans of authors like K.L. Slater, Rachel Abbott and Claire Mackintosh

I think I could tell pretty much after the opening few chapters that I was going to enjoy this book. We have a robbery carried out in London in the late 80s, followed by some repercussions a year or two later on the French Riviera, fast forwarding to almost current times and a murderous rampage in Western Australia. Grace Dobbs stops the killer and unwittingly casts a spotlight on herself.

Over to England and Wales then and we continue - a fractured family - one that was sacrificed, a vengeful criminal with a long memory and some claims to fatherhood, a psychopathic nephew, other assorted misfits, a life lived under the radar, some decent, loyal friends, connections to some shady Irish alphabet organisation, and a game of cat and mouse as Frank Gilligan endeavours to bring his near 25 year crusade to catch the one from the heist that got away. Grace may be his daughter, but she's also a pawn in his game.

As our story unfolds, we see Grace's resourcefulness and determination - a quality she has clearly inherited from her mother. Revelations about her past and the secrets those closest to her have been guarding leave her shocked - hmm.... maybe more surprised, but never overwhelmed or paralysed by fear. She's likable, thoughtful, brave throughout and the star of the show.

We have plenty of action throughout, with a fair few deaths and casualties, some of them innocents, as the two sides in our ongoing dispute come ever closer to a resolution, though it's doubtful it will be to the mutual benefit of both parties.

Sucked into the story, I read the book over a few days. Fast-paced, interesting settings, especially Anglesey, lots going on, a decent cast of characters and a story which all came together and ended satisfactorily. Nothing that grated, nothing that annoyed me. A pretty exciting read, overall.