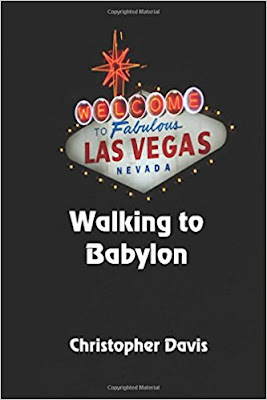 Walking to Babylon is a dark, gritty tale of two transplanted New Jersey boys who grow up together in the desert city of Las Vegas, busting balls for the old man. Sammy Soriano tells us the story as he walks away from a burning car where the body of his lifelong pal, Tommy Two-Guns Viglierchio had been left, along with those of three Mexican nationals that had tried to muscle in on the action. Viglierchio has been losing his battle with cancer for some time and Soriano knew it. There was nothing that he could do to help his friend other than be there for him.

My first time reading Christopher Davis, but hopefully not the last - his novel Crossfire sits on the pile. Here we have an enjoyable tale of the friendship between two boys, Sammy and Tommy. Childhood pals, the pair grow up to work as heavies in the shady world of Vegas casinos.

Plenty of drinking, partying, girls and errand running for the boss, and a gradual moving up the ladder in the organisation, with the odd drive out to the desert for a bit of garbage disposal. Given the nature of some of their tasks, you feel like you shouldn't enjoy their company but you do.

The narrative has an easy cadence to it, which just keeps you turning the pages. Plenty of family in the story; Sammy's girlfriend, becoming his wife, becoming a parent, becoming his ex-wife, remaining friends. Plus there's a fair bit about Sammy's own mother; the aftermath of his father's death and their rapid transplanting to Vegas, the money problems, the jobs she worked to keep a roof over their heads and as Sammy finds his feet in the organisation the role reversal - how Sammy takes care of her. Along the way Sammy also finds out about his deceased father, the manner of his death and the regard he was held in.

Gangsters, friendship and family and casino life - lots to like.