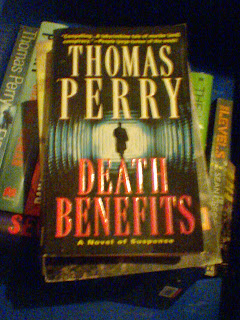 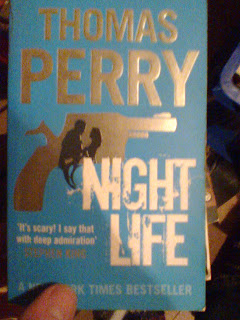 Thomas Perry is another author whose books I seem to collect but never really get around to reading.

He's penned over 25 novels since the early 80s, including eight in the Jane Whitefield series and three in his Butcher Boy series. I've read exactly three - The Butcher's Boy, Metzger's Dog and most recently (2013) The Boyfriend.

He has a new one out this week - The Bomb Maker. He needs to slow down a bit! 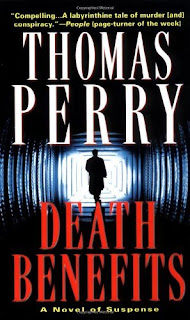 Murder, Conspiracy, and High-Stakes Fraud
In 1982, Thomas Perry won an Edgar Award for his debut novel, The Butcher's Boy, and he has since established himself as one our most original, consistently entertaining suspense novelists. For the past several years, in books like Vanishing Act, Blood Money, and Shadow Woman, he has chronicled the adventures of Native American "guide" and escape expert Jane Whitefield. His latest novel, Death Benefits, represents a radical -- and effective -- departure, giving us a witty, informed, thoroughly enjoyable account of murder, conspiracy, and high-stakes insurance fraud.

The hero of Death Benefits is John Walker, a likable 24-year-old data analyst for McClaren Life and Casualty, a venerable San Francisco-based insurance firm. Walker spends the bulk of his working hours performing bloodless analyses of raw statistical data. All of that changes abruptly when he finds himself partnered with Max Spillman, a maverick security consultant hired to investigate a costly -- and ultimately tragic -- insurance scam.

The action begins when McClaren pays out a $12 million death benefit to the man believed to be the legitimate beneficiary of a substantial life insurance policy. Several days later, the real beneficiary shows up, demanding his money. In the ensuing chaos, it is learned that the agent who approved the false payment -- Walker's former girlfriend, Ellen Snyder -- has disappeared, leaving a complex paper trail behind. At this point, Max Spillman, with a bewildered John Walker in tow, begins the process of following that trail to a series of startling revelations.

The initial stages of their journey lead from Pasadena -- where Spillman and his protégé survive a violent encounter with thugs masquerading as policemen -- to an isolated field in Illinois, where the recently murdered Ellen Snyder lies buried. Some weeks later, the investigation resumes in Miami Beach. There, against the vibrant backdrop of a tropical hurricane, Walker stumbles across several additional corpses and begins to discern the outline of a widespread, highly organized criminal conspiracy. As the narrative progresses, moving from Miami to Chicago to a sinister littletown in rural New Hampshire -- a town in which everyone seems to be related to everyone else -- the action intensifies, culminating in an extended climax in which Walker and Spillman -- accompanied by a beautiful outlaw hacker named Mary Catherine Casey -- fight for survival against a vicious, ubiquitous enemy.

En route to that conclusion, Perry offers us his trademark combination of precise observation, credible characters, and clean, unobtrusive prose. Like the best of Perry's earlier work, Death Benefits is a first-class entertainment by a gifted, underappreciated figure. Maybe this time, he'll finally acquire the audience he deserves. 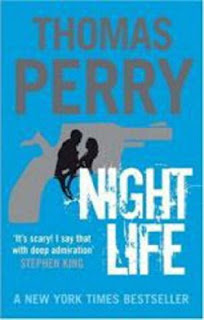 When the cousin of Los Angeles underworld figure Hugo Poole is found shot to death in his Portland, Oregon, home, police find nothing at the scene of the crime except several long strands of blond hair hinting that a second victim may have been involved. Hotel security tapes from the victim's last vacation reveal an out-of-focus picture of a young blond woman entering and leaving his room. Could she also be a murder victim?

Portland homicide detective Catherine Hobbes is determined to solve the case and locate the missing blonde, but her feelings, and the investigation, are complicated when Hugo hires private detective Joe Pitt to perform a parallel investigation. As the Joe and Catherine form an uneasy alliance, the murder count rises-and both realize that the pretty young woman in the security tapes is not a victim at all.

As Catherine follows the evidence, she finds herself in a deadly contest with an unpredictable adversary capable of changing her appearance and identity at will. Catherine must use everything she knows, as a homicide detective and as a woman, to stop a murderer who kills on impulse and with ease, and who becomes more efficient and elusive with each crime.