BLACK AND WHITE, WITH A TOUCH OF GRAY!

A few more from the stash in the tubs, currently on pallets, in a warehouse awaiting a house move that never seems to get any nearer.

When the gangland owner of a pit bull that killed a three-year-old girl is found gutted on an Edinburgh hill Gus Dury is asked to investigate, and soon finds himself up to his neck in the warring underworld of the city's sink estates. Amidst illegal dog fights, a missing 50 grand and a police force and judiciary desperate to cover their links to a brutal killing, Gus must work fast to root out the truth, whilst the case sinks its teeth ever deeper into him.


New York. It may be Christmas in New York, but for ex-soldier turned elite bodyguard Ryan Lock, it's business as usual: his mission is to protect one of America's most ruthless businessmen. A Bloody Shoot-Out. Suddenly gunshots ring out. People run for cover. Innocent people are mown down. Amid the chaos, Lock's hunt for the killers turns into an explosive game of cat and mouse. A Deadly Secret. Lock's search for the truth takes him from the rooftops of a New York skyscraper to a heavily fortified warehouse on the Hudson where he confronts one of the world's most dangerous women. As the clock ticks towards midnight on New Year's Eve, all routes into and out of Manhattan are sealed, and Lock realises that not only is his own life in terrible danger but so are the lives of millions of others...


When newspaper magnate Richard Jewell is found dead at his country estate, clutching a shotgun in his lifeless hands, few see his demise as cause for sorrow. But before long Doctor Quirke and Inspector Hackett realise that, rather than the suspected suicide, 'Diamond Dick' has in fact been murdered. Jewell had made many enemies over the years and suspicion soon falls on one of his biggest rivals. But as Quirke and his assistant Sinclair get to know Jewell's beautiful, enigmatic wife Francoise d'Aubigny, and his fragile sister Dannie, as well as those who work for the family, it gradually becomes clear that all is not as it seems. As Quirke's investigations return him to the notorious orphanage of St Christopher's, where he once resided, events begin to take a much darker turn. Quirke finds himself reunited with an old enemy and Sinclair receives sinister threats. But what have the shadowy benefactors of St Christopher's to do with it all? Against the backdrop of 1950's Dublin, Benjamin Black conjures another atmospheric, beguiling mystery.


What men do to their bodies and what their bodies do to them. That's the subject of this visceral debut story collection from Glenn Gray, who brings his singular voice to an unholy genre all his own. In these seventeen remarkable stories, bodies harbor secrets, slough off the past, and morph in grotesque, absurd ways.

Doctors are required to do no harm, but not writers like Glenn Gray. His characters -- doctors and patients, body builders and drug dealers -- take up permanent residence in our imaginations, leaving us amazed, damaged, and transformed forever.

Once an aspiring actress, Dana Coakley has abandoned the bright lights of stardom for a less glamourous position: as superintendent of an Upper West Side apartment building. The pay isn't great, and grouting and plumbing aren't dream work, but the rent is free, and it gives her more time to work with the disadvantaged inner-city kids she tutors.


One of those kids, Travis, confides in Dana that he believes a fatal fire in a low-income housing building was actually the work of an arsonist, and not the accident it was deemed. Dana begins investigating, but her snooping unearths more questions than it answers. What does a wealthy real-estate mogul have to do with the fire? What does a teenage drug lord know about it? And can Dana-with the help of her wisecracking friends-solve the case between leaky faucets, loose tiles, and whiny tenants?

From the Gold Medal author of more than 35 pulp hard boiled crime thrillers; Lionel White was praised by The New York Times as "the master of the big caper."

Professional fence Frank Harper was loaded six weeks ago, after his last successful jack backed by butter and egg man Flood. But after dropping two thousand berries on a three-legged nag, Frank is desperate for some lettuce, fast.


The wheels were beginning to turn. From all parts of the country quiet, tough men slipped into the small southern coastal town and took up the final vigil. There was the arsonist, the safe blower, the boy-faced killer-there was a regiment of crack, lawless men waiting out the minutes until Saturday night-the night the town would explode into violence. For in the center of town sat the bank-a citadel of twelve million dollars, impregnable as Gibraltar, safe as a church. Safe-until precisely ten-fifteen on Saturday night. Until the wheels began to pick up momentum, and suddenly a fire lit the sky, and the power went off all over town and under way went the king-sized knock-over. The grand slam. The Big Caper. 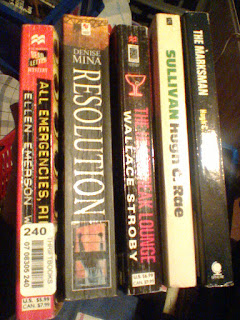 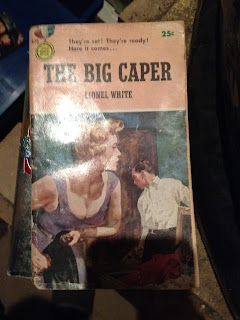 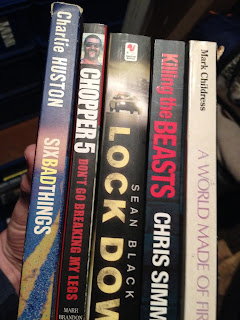 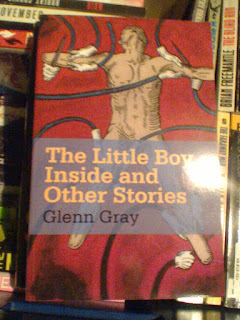 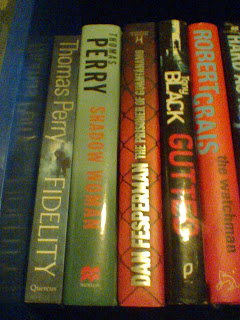 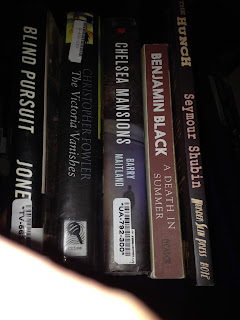