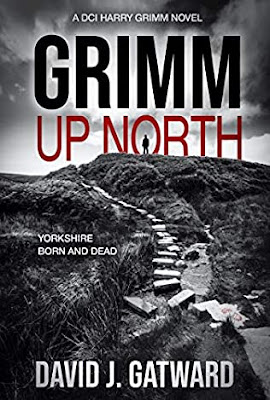 Synopsis/blurb ...
Edinburgh has Rebus.
The Highlands have Logan.
Now Yorkshire has Grimm.
Welcome to Wensleydale, where the cheese is famous, the scenery beautiful, and the locals have murder on their minds …
Detective Chief Inspector Harry Grimm is forced to take leave from Bristol’s Major Investigations Team when his boss, tired of Harry chasing the ghost of his murderous father, sends him north on secondment.
Used to city life and high stress, Harry fears his life will now be spent handing out speeding tickets, finding lost sheep, and directing tourists. But when a local teenager runs away, Harry finds himself pulled into an investigation much worse than anyone could have ever expected.
The nicer the place, the darker the secrets. Wensleydale is beautiful, everyone is friendly and welcoming, and people just don’t get murdered ... do they? A classic fish-out-of-water crime mystery set in the stunning and evocative scenery of Wensleydale in North Yorkshire.
Grimm up North is the terrific debut crime novel from award-winning author David J. Gatward. Perfect for fans of L. J. Ross, J. D. Kirk, Simon McCleave, Alex Smith, J. M. Dalgliesh, J. E. Mayhew, and J. R. Ellis.
Another new-to-me author in David J. Gatward and the first in his DCI Harry Grimm series. The series currently runs to about seven books in total and after enjoying this opener, Grimm Up North, I reckon I’ll be in for a good time if I try a few more in the series at some point. I plan to.
I liked the fish out of water analogy alluded to in the blurb, and it’s particularly appropriate. Grimm has already made a difficult adjustment from active Military service to civilian life. With his scarred face – thanks to an IED - a testament to the hazards of conflict, life in the police service offers hostilities of a slightly different nature. Some of them are still life threatening – tackling violent criminals with firearms - and some are less troublesome in a physical sense but just as explosive. ie crossing swords with police hierarchies.
Grimm is on his boss’s naughty list and finds himself uprooted from city life in Bristol to the famous cheese producing backwater of Wensleydale. Another adjustment needs to be made. However, life in the slower lane soon speeds up with a missing girl case, soon escalating to the murder of her mum.
I liked the settling in process with our main character and his new colleagues. Local mannerisms, customs, dietary differences all need to be accommodated, as does another new boss who has an inflated sense of self-importance. Experience of investigating serious cases, sees Grimm’s colleagues soon deferring to the outsider in their ranks.
A missing girl, text messages, family interviews, church background, a preacher, a corpse, secrets, lies, betrayals, and an urgent investigation slightly prioritising a girl’s safety over the capture of a killer.
There’s a lot of local flavour in the narrative. Harry Grimm has his own family demons which hover in the background and which I’m guessing may feature more prominently in future books. They are an important part of who he is, but they don’t consume him or stop him performing capably as an officer of the law. He’s abrasive and happy to butt heads with anyone who gets in the way of his investigation. Here, I enjoyed the combative encounters between him and the pathologist. His encounter with the press was similarly memorable.
Overall, I really liked this one. It was realistic, gritty and believable. No fancy Dan twisted killers with grand designs, just murder of the ordinary variety. Murder in fiction, with the accompanying fallout of loss, bereavement and a struggle for comprehension, even by the killer can be sad.
As a footnote, there's a decent narration also from Aubrey Parsons.