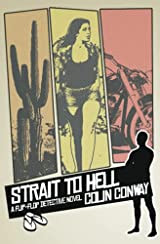 Synopsis/blurb ...
Rule #2 – No attachments.
Sam Strait didn’t want to leave home early for the snowbird season, but the rules he lived his life by demanded it. When a relationship turned sour, the rules dictated he pack his bags and get out of town.
He could have gone anywhere in the world, but Sam picked Phoenix, Arizona. With its beautiful women, fall baseball league, and warm winters, what more could a single guy ask for?
When the death of a new friend brings violent strangers into his life, Sam is forced to make a choice—run out of town or find a killer.
If he were smart, he’d adhere to the second rule, but there’s a beautiful woman in the mix. Soon, Sam is racing across the California desert with a band of outlaws on his heels. He’s must find the killer quick before there’s never a chance to leave.
Strait to Hell is the second book in an exciting new series from the author of the 509 Crime Stories and the co-author of the Charlie-316 series. If you like your crime fiction with a dose of humor, then pick up this book today.
Strait to Hell was an enjoyable second read in author Colin Conway's Sam Strait series. Strait Over Tackle was enjoyed back in July. I remarked then than while I enjoyed the lighter, humorous touches in that one, I didn't think Sam Strait was my favourite series character from this author. Strait to Hell reinforced that assessment.
Nothing in the book irritated or annoyed me, but I just don't find myself particularly warming to the main character. Strait is a snowbird. (Definition - a northern US inhabitant who decamps to warmer climes during winter.) Strait is single, retired, an ex-deputy, financially comfortable and he lives his life by a set of rules. The most important of which seems to be - don't form attachments to the opposite sex. He does struggle with this rule, as he becomes involved with a woman in this one. (This kinda happens in the first book as well, so it's a rule that Sam is constantly re-evaluating.) There's nothing objectionable about the character, but maybe someone that eschews commitment is a little less trustworthy or sympathetic to me. I suppose indifference is my main emotion and if you don't especially care about a character and what happens to them, the mystery and events in the book matter less.
One of Strait's new found friends in Phoenix, gets killed and somewhat bizarrely Strait gets three separate visits from contacts of the deceased, asking, threatening and cajoling him into finding something that the dead man had been trying to track down. Reluctantly Strait, instead of fleeing town decides to do what is requested. Maybe if he can find 'Rotor' - whoever or whatever it is - he'll get answers as to who killed his friend which will satisfy him and his deceased friend's relatives, including the dead man's niece, his current (not-too-serious) partner. And there'll be a some justice served.
I enjoyed how the story unfolded and the efforts Sam and his girlfriend (don't call her that) made to get to the bottom of things. For someone who wasn't a cop for too long, and never a detective, Sam has a decent head for investigating. He works independently of the cops here, but with their tacit agreement. He takes a few licks in this one, but not as many as last time and he shows admirable people management and negotiating skills to get his three competing motivators onboard with his plans.
We get answers in the end, though maybe the real question is still unanswered - does Strait finally kick his no commitment rule to the kerb?

Decent pace, decent mystery, plenty of humour - but no real belly laughs as such. I did like the setting and the road trips through the desert to Hell (a real place apparently). More to like than dislike.
3 from 5
Read - September, 2021
Published - 2021
Page count - 320
Source - review copy from author
Format - Kindle
Posted by col2910 at 05:34