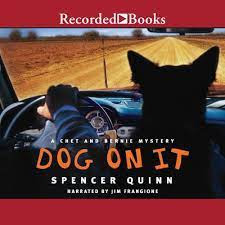 Synopsis/blurb ...
Meet Chet, the wise and lovable canine narrator of Dog on It, who works alongside Bernie, a down-on-his-luck private investigator. Chet might have flunked out of police school ("I'd been the best leaper in K-9 class, which had led to all the trouble in a way I couldn't remember exactly, although blood was involved"), but he's a detective through and through.
In this, their first adventure, Chet and Bernie investigate the disappearance of Madison, a teenage girl who may or may not have been kidnapped, but who has definitely gotten mixed up with some very unsavory characters. A well-behaved, gifted student, she didn't arrive home after school and her divorced mother is frantic. Bernie is quick to take the case -- something about a cash flow problem that Chet's not all that clear about -- and he's relieved, if vaguely suspicious, when Madison turns up unharmed with a story that doesn't add up. But when she disappears for a second time in a week, Bernie and Chet aren't taking any chances; they launch a full-blown investigation. Without a ransom demand, they're not convinced it's a kidnapping, but they are sure of one thing: something smells funny.
Their search for clues takes them into the desert to biker bars and other exotic locals, with Chet's highly trained nose leading the way. Both Chet and Bernie bring their own special skills to the hunt, one that puts each of them in peril. But even as the bad guys try to turn the tables, this duo is nothing if not resourceful, and the result is an uncommonly satisfying adventure.
With his doggy ways and his endearingly hardboiled voice, Chet is full of heart and occasionally prone to mischief. He is intensely loyal to Bernie, who, though distracted by issues that Chet has difficulty understanding -- like divorce, child custody, and other peculiar human concerns -- is enormously likable himself, in his flawed, all-too-human way.
An absolutely fantastic book which far exceeded my expectations. I think a superb narration by Jim Frangione enhanced an already compelling story. Frangione had me in stitches. We have a PI case involving the hunt for a missing girl, told to us by Chet. Chet is the canine half of our double act, along with his owner, Bernie.
Fresh, exciting, interesting and absolutely hilarious as Chet, our unreliable narrator often gets sidetracked and somewhat distracted.... burgers, biscuits, interesting smells. Hey, if you had a nose like his, who wouldn't?  I don't think you need to be a dog lover to enjoy the book, but maybe you 'get it' a little bit more if you are. It's interesting to see what the thought processes are of our owners. Loyalty, bravery, love, adoration and companionship are definitely at the forefront of the relationship between Bernie and Chet.
We have a missing girl case, our unusual double act, several broken marriages, back story, a journalist, mild drug use, a gang banger, an investigation, the police, a distracted parent, money troubles, secrets, property development, dog-napping, Russian villains, a disused mine, the desert, a gang of bikers, a taste for beer, a pet shelter with a close shave, a lot more besides and eventually answers.
I think if the story had been told in a more traditional fashion, it perhaps wouldn't have been quite as addictive. I kind of guessed who was up to mischief and why, but it was a fun outing, especially when Chet knew stuff that Bernie didn't.
A brilliant opener to a dozen long series (maybe more). Spencer Quinn is a pseudonym for author, Peter Abrahams. I'll definitely be reading more in this series (I already have) and some of Mr Abrahams slightly more serious offerings.