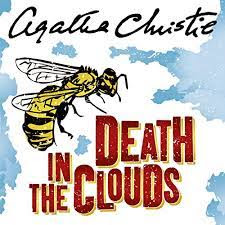 Synopsis/blurb ...
A woman is killed by a poisoned dart in the enclosed confines of a commercial passenger plane…
From seat No.9, Hercule Poirot was ideally placed to observe his fellow air passengers. Over to his right sat a pretty young woman, clearly infatuated with the man opposite; ahead, in seat No.13, sat a Countess with a poorly-concealed cocaine habit; across the gangway in seat No.8, a detective writer was being troubled by an aggressive wasp.
What Poirot did not yet realize was that behind him, in seat No.2, sat the slumped, lifeless body of a woman.
Another enjoyable Agatha Christie outing courtesy of a smooth narration from Hugh Fraser.
Death in the Clouds was my first Christie outing featuring Hercule Poirot and without being blown away by the prose, I definitely think I'll be back for more in the future. (Already have been in fact.)
Poirot investigates the suspicious death of a French business woman, who appears to have been killed by a poison dart whilst a passenger on a plane from France to London. Poirot himself is a passenger on the same flight and is one of a small number of people who could conceivably have killed her.
Cue an inquest and an investigation by Poirot, in conjunction with the British and French police. Through the course of the enquiries we discover more about the victim, namely her business and her family background as well as those of and her fellow passengers and the crew members.
Motives are uncovered, connections are discovered, allies are enlisted and traps are set. No one gets away with murder on Poirot's watch. I quite liked how this one unfolded. I enjoyed finding out about the different cast of characters; their misfortunes and woes, their careers, their difficulties, their liaisons, their secrets, their weaknesses and the identity of the one who was prepared to murder to achieve his/her ends.
I think the TV adaptations have unfairly soured me on Poirot. Rightly or wrongly, I had him pegged as arrogant, which is not an attractive characteristic. Here he comes across as amiable and quite friendly and I found him better company than I expected to.
I liked the story and found the reveal plausible, but I defy any to reach the same conclusion as Poirot and for the same reasons. By guesswork, maybe. A lot of information is known only to Poirot until the end. I don't think it spoiled anything for me, I was happy to sit back and listen to it all unfold.
4 from 5 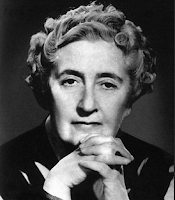