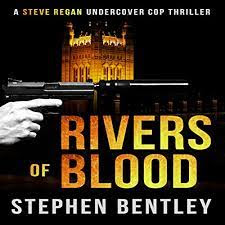 Synopsis/blurb ...
There’s only one thing more dangerous than becoming a confidential informant.
Being an undercover cop. They have something in common - living on the edge.
Another Gripping Fast-paced Thriller in the Steve Regan Undercover Cop series. If you like Reacher, you will love Regan - the 'real deal!'
Steve Regan is still undercover working for the same UK secret government department. He sets off on what he thinks is a last assignment: seconded to the Australian Feds posing as a hit man hired to assassinate a liberal Australian politician.
The Australian murder plot leads to the discovery of a frightening far-reaching white supremacist conspiracy to overthrow the government of the United Kingdom.
Regan goes deep undercover within a London police CID department to gather evidence against the white supremacists.
Regan's undercover infiltration is the most dangerous and audacious assignment he has faced.
Will he succeed? Or will this dangerous game endanger someone close to him?
Who will survive and who will die?
Best book ever? No but enough present to make it worth the while listening to this one. That said the narrator (Alan R. Gron) did seem to have trouble with some of the accents he was attempting.... Aussie, Scouse and a kind of Michael Caine lilt. Not the best narration I've encountered but I've listened to worse.
Undercover cops, one in particular - Steve Regan, Australia - posing as a hit man in a sting, back in Blighty and undercover again, infiltrating an international Aryan Supremacy group with far-reaching plans and tentacles in the police and Government.
Danger, tension, excitement, a bit of humour, murder, racism, plenty of back story and family involvement, as main character, Steve Regan's wife is also a part of the same secret department. I liked the story, but didn't love it. I didn't quite feel any emotional involvement in the story mainly relayed from Steve's perspective. He loves his wife and children, and I liked him for that, but when they were in jeopardy I didn't really share his anxiety or pain.
I think the story worked for me on an uninvested level. It's fast-moving and fairly topical and while I sided with the side of good and I'm all for taking down racist scumbags, I wasn't gripped. Call me a conspiracy theorist but I could buy into how the resolution would play out in real life, regarding deniability and government cover-ups.
I have a couple more in Bentley's Regan series on the pile, two books that pre-date this series entry and a standalone novel. I expect I'll enjoy them at some point in the future.