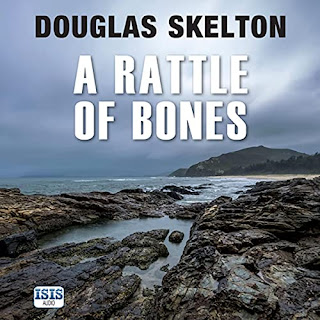 Synopsis/blurb ...
In 1752, Seamus a'Ghlynne, James of the Glen, was executed for the murder of government man Colin Campbell. He was almost certainly innocent. When banners are placed at his gravesite claiming that his namesake, James Stewart, is innocent of murder, reporter Rebecca Connolly smells a story.
The young Stewart has been in prison for 10 years for the brutal murder of his lover, lawyer and politician Murdo Maxwell. Rebecca soon discovers that Maxwell believed he was being followed prior to his murder and his phones were tapped. As Rebecca keeps digging, she finds herself in the sights of Inverness crime matriarch Mo Burke, who wants payback for the damage caused to her family in a previous case.
A Rattle of Bones provided an enjoyable reconnection with author Douglas Skelton's work after having enjoyed a couple from his Davie McCall series a few years back. Blood City and Open Wounds were enjoyed in 2016. His latest is the third in his Rebecca Connolly series. Connolly is an investigative journalist.
I do like a storyline where the focus is on attempting to right a wrong from the past. Here Rebecca Connolly has a sniff that a solicitor is about to break out some new evidence which will cast doubt on a 10 year’s old murder conviction. Connolly gets stuck into the story.
Story bullet points …. family hostility and a distrust of media, a sense of loss coupled with righteous anger, death bed testimonies, business rivalries, lawyerly differences, hidden sexuality, secrets, various family fractures and schisms, criminal enterprises and feuds, police involvement, threats and pressures from the higher-ups in authority, set-ups, patsies and fixers, mistakes, poor choices, old scores for settling, publicity, a thirst for revenge and a quest for justice.
I enjoyed how the story unfolded. We have shifting perspectives drifting into the narrative which made sense once the whole story pulled together at the conclusion. Assumptions I had made while reading were dispelled by the author.
As well as the breaking hot news case, Connolly is also the target of some other criminal elements that want to give her some payback for events in an earlier book. This strand adds a bit more meat to the bones and there is some crossover into the main storyline. Skelton also manages to weave a bit of Scottish history into the tale as well.
I liked the setting and the main character is a breath of fresh air. She’s single and there’s a back story to her, but she’s able a capable and fully functioning member of society. No drink issues or addictions. No odd mannerisms or quirks. It makes a change having a big dose of normality in my reading.

Overall verdict - I really liked it. I enjoyed the narration by Sarah Barron and I had forgotten how much I enjoyed Douglas Skelton’s books. Note to self – dig out the other Davie McCall’s on the pile and have a look at the first two Connolly books; Thunder Bay and The Blood is Still.
4 from 5
Read - (listened to) August, 2021
Published - 2021
Page count - 320 (9 hrs 38 mins)
Source - review copy courtesy of Isis Audio
Format - Audible
Posted by col2910 at 05:05