When I got on top of Roseberry, I saw an old couple walking a poodle. I waited until they left, then went to the edge and looked over.

This was the way she went. It would be my way too. But not yet. I still had a few things to do.

In this chapter of the Dark Teesside series of short stories with a twist, the events unfold in Thornaby and Cleveland...

Introducing Roseberry Topping, one of many dark stories from the pen of award winning author Glenn McGoldrick.

I've enjoyed some of Glenn McGoldrick's short stories in the past and was interested enough to bag a copy initially from him direct then subsequently on Amazon when his latest one dropped.

Loss, bereavement, pain, guilt, regret, an intended action, some loose ends to tie up and then the deed.

I liked it well enough. McGoldrick sets his tales in his native North East sometimes urban, sometimes in the countryside. Here there's a bit of both.

I was sympathetic to the main character, felt his sense of loss and his lack of desire to go on.  It might be one of those stories that should carry a tag at the bottom stating that if you're feeling vulnerable or low seek help, along with a contact number for the Samaritans. 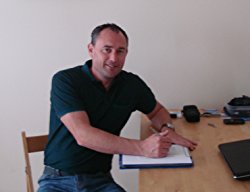 Not much cheer to be had here I'm afraid, but it gives you pause for thought, especially considering the fragility of life.