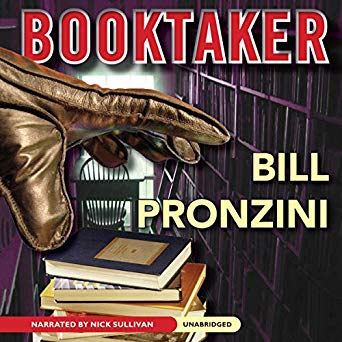 A second outing for this audiobook after having first listened to it back in 2015.

At the time of first listening to it I was immersed in Pronzini's Nameless series and was trying to read my way through it at a pace of a book a month. I was familiar with our PI's quirks and foibles and romance and pulp magazine collecting hobby.

Second time around and having temporarily abandoned (it's only 4 years or so since my last) the Nameless reading project I had a bit of distance on the character. Here I'm kind of less enamored by him. He seems a tad desperate and needy in the throes of his fledgling romance with Kerry.

The case is interesting, though I did remember who the guilty party was and also the outcome. There are elements of a locked room mystery and possibly an author hat-tip to an earlier age. Or I'm talking nonsense as I don't read that many - scrub that, any really.

A timely reminder to get back to the series books at some point.

A four star tale last time - probably a three and a half this.

My take......
My first audio-book ever and a bit of spooky synchronicity. I was doing a chore or two around the house and it would have been impractical, nay on impossible to complete with a book in one hand, so having spotted this earlier in the month as a free audible download on Amazon, it was a case of kill two birds with the one stone.
By good fortune events in Booktaker take place several weeks after Nameless’ last case Hoodwink, which I only read a fortnight ago. (Booktaker in print is part of the Casefile collection of short stories which was the 11th or 12th release in the series, so something I’ll be seeing again in a few month’s time!)
A new experience for me then and an enjoyable one as the narration is quite smooth and soothing. Nick Sullivan is the voice. I can’t say that the face or name or even the voice is immediately familiar, but looking at his website – he has added his dulcet tones to many a recognisable book.
Anyway back to the case at hand and Nameless is engaged by antiquarian book seller in order to discover who among his staff is responsible for the recent glut of theft of valuable maps from his store. Nameless, bored and alone as new-found love Kerry is working out of town for a few days, takes the case and starts work in the store as a new clerk.
With a staff of four, Nameless tries to get close to all of the employees with limited success. When another map goes missing, this time when Kerry is in store book browsing, the owner’s patience is severely tested. An employee quits in disgust at being requested to submit to a body-search and the rest of the staff aren’t carrying the map on their person.
A frustrated Nameless is on his way to dinner with Kerry an hour or two later, when a chance remark from her sets his brain cogs turning and the solution is at hand. Before its revealed our love-struck pair are nearly run off the road by a motorist. More than coincidence, as our book thief has realised the mistake he’s made and is endeavouring to take murderous retribution before he’s exposed.
127 minutes long and an enjoyable encounter.
4 from 5
Audible freebie from Amazon UK.
Listened to in August, 2015