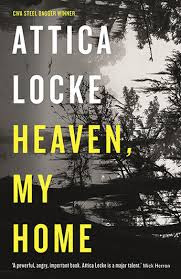 In this "captivating" crime novel (People), Texas Ranger Darren Mathews is on the hunt for a missing boy -- but it's the boy's family of white supremacists who are his real target.

9-year-old Levi King knew he should have left for home sooner; now he's alone in the darkness of vast Caddo Lake, in a boat whose motor just died. A sudden noise distracts him - and all goes dark.

Darren Mathews is trying to emerge from another kind of darkness; after the events of his previous investigation, his marriage is in a precarious state of re-building, and his career and reputation lie in the hands of his mother, who's never exactly had his best interests at heart. Now she holds the key to his freedom, and she's not above a little maternal blackmail to press her advantage.

An unlikely possibility of rescue arrives in the form of a case down Highway 59, in a small lakeside town where the local economy thrives on nostalgia for ante-bellum Texas - and some of the era's racial attitudes still thrive as well. Levi's disappearance has links to Darren's last case, and to a wealthy businesswoman, the boy's grandmother, who seems more concerned about the fate of her business than that of her grandson.

Darren has to battle centuries-old suspicions and prejudices, as well as threats that have been reignited in the current political climate, as he races to find the boy, and to save himself.

Heaven, My Home is the second Darren Mathews book from Attica Locke after Bluebird, Bluebird. I've enjoyed both books without feeling the need to backtrack on the author's earlier works, of which there are a few. (Three)

Here Mathews is forced into an investigation into the disappearance of a boy; the boy's father (incarcerated) and step-father have links to white supremacist groups. Mathews with a potentially career ending event and investigation from an incident in the first book hanging over him, sees the opportunity to solve the crime and manipulate the outcome to save himself. Whether he can also save his marriage is debatable.

I quite like Darren has a character. He has his flaws, he might be guilty of some rash decision making and mistakes and he's in a difficult predicament. His heart is in the right place. He's more on point here and less beholden to alcohol as a crutch and he's hopeful he can save the boy when everyone else seems to have given up on him. That he might be able to manipulate events to relieve some pressure on him is understandable.

Race is very important here and plays a big part in the aims of the FBI, with events foreshadowed by the impending Trump administration taking office.

I liked the history element Locke introduces to the narrative, which helps sustain the story. I enjoyed the setting of the book and the tensions and conflict surrounded race added layers to a missing child case. The outcome and the speed at which we came upon it all worked for me.

There is still the over-riding story ARC concerning Darren and his career and marriage still to be resolved, but I didn't feel manipulated by the author into issuing a BOLO for the next book in the series. That said I'll probably want to read it at some point although I'm unaware of a third book coming down the pike.