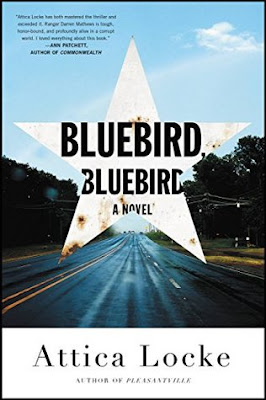 Southern fables usually go the other way around. A white woman is killed or harmed in some way, real or imagined, and then, like the moon follows the sun, a black man ends up dead.

But when it comes to law and order, East Texas plays by its own rules - a fact that Darren Mathews, a black Texas Ranger working the backwoods towns of Highway 59, knows all too well. Deeply ambivalent about his home state, he was the first in his family to get as far away from Texas as he could. Until duty called him home.

So when allegiance to his roots puts his job in jeopardy, he is drawn to a case in the small town of Lark, where two dead bodies washed up in the bayou. First a black lawyer from Chicago and then, three days later, a local white woman, and it's stirred up a hornet's nest of resentment. Darren must solve the crimes - and save himself in the process - before Lark's long-simmering racial fault lines erupt.

An interesting and entertaining read and my first taste of Attica Locke's work.

Two deaths in Lark, East Texas, one black, one white and Darren Mathews, a black Texas Ranger wants to investigate. Even though he's in a bit of trouble with his bosses, an investigation is what we get.

I quite liked the book overall. The initial set-up of the crimes kind of leads you to believe that there is a rather simple motive and solution to the crimes, which inevitably then has you feeling the opposite is the truth. All is revealed at the end and one of the characters who is a little bit hinky throughout is part of the denouement. There's nothing I could quite put my finger on about him, other than he was a bit off.

I liked the setting, which with it's race divisions offers plenty of scope for drama. I'm not too sure if I enjoyed the main character's company or not. Darren Mathews is flawed - inevitably. He's rather too fond of the drink which effects his judgement and spills over into his working life. He's committed to his work and has a thirst (not only for booze) but justice. His family history relating to his uncles and his upbringing are important to him and have helped mould him. His mother is the wild card. His wife is tired, impatient and not too understanding.

The investigation seemed to be a little too personal for him, there's a lack of objectivity on display and what was he thinking allowing one of the victim's wife to get so close both to him personally and to his enquiries. That said it's all part of the outsider element trying to penetrate a small community.

Post-investigation, Locke serves up another twist, which I kind of feel is going to feature at some point in a future book further down the line. (The second Highway book featuring Darren Mathews - Heaven, My Home drops later this year.) It was a twist I could have done without TBH. I'm not especially a fan of this kind of snare/writer tactic to keep a reader hooked. If anything it makes me dig my heels in and switch off.

On balance, I found a lot more to like and enjoy than grumble about. I enjoyed the writing, the plot worked, the characters had substance and flesh and were more than stereotypes. I guess I'll read the next in the series if I cross paths with it, as I like the blurb I've seen. I don't think I'd be too bothered about back-tracking on the author's previous books.