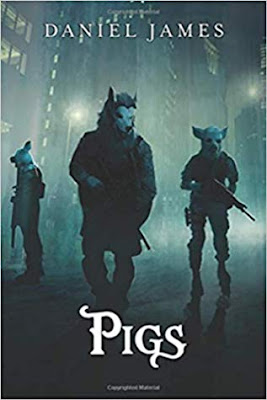 Isaac Reid, a former professional thief, has just finished a ten-year stint in prison for a botched job turned bloodbath. Now all he wants is to go straight and make amends with his wife and young son. On his first night of freedom his loved ones are brutally slain by a bitter enemy. Surviving the encounter, Isaac struggles with his choices: do right by his late family’s wishes and abide by the law, or seek vengeance. But he’ll need to decide quickly, as another mysterious force from his past is now in play: a cold killer wearing a wolf mask, leading a band of pig-masked assassins. To Isaac, these men are strangers, but they’re prepared to kill any who get between them and him.

A book from Book Sirens review site that I was attracted to initially because of the cover. I think I'm equally enthralled and repelled by animal masks. (Dead President's masks have a similar effect.) Add a pig mask to a horror film, however lame and I'm hiding behind the sofa. Once I'd seen the image I needed to look at the book.

Interesting premise - an ex-con (always a tick in the box) just out and looking to go straight. Until his wife and child are murdered. So basically a tale of revenge and street justice as events from the past come back into play, though we have more than one candidate looking for retribution.

Our sympathies lie with Isaac, the now family-less ex-con, though because of the speed of the demise of his wife and son, I didn't really feel the loss as intensely as our main man. Maybe if we had spent more time reconnecting with the family after a ten year incarceration, I would have been more invested emotionally in the book.

There's a decent story. Events today are triggered from the fall-out from a botched kidnap which saw Isaac put away for ten years. Determined to go straight and win back his family, he's severed ties with his former accomplices. The demise of his family and with two different pursuers on his back - one known and one unknown - sees him reluctantly reconnecting with his former criminal "family."

I liked the action, the fast-pace, the way in which the author reveals the events of the past and the character's shared histories leading us up to the present antagonism and situation. There's a rekindling of former friendships with some initial awkwardness but no lack of trust.

As the story takes hold we have plenty of casualties.  There's a high body count, but not insanely so. The book's a bit of a page turner. I kind of blasted through 120 pages one morning, 30 more in the evening and the final 130-odd the next morning. 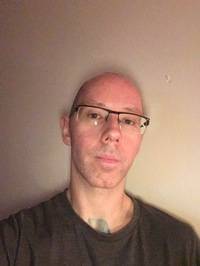 Decent characters with believable motivations, decent action scenes, decent outcome. I liked the Chicago (mostly) setting. It's a quick read and I enjoyed it, though more as an impartial observer than with any real stake in the outcome.