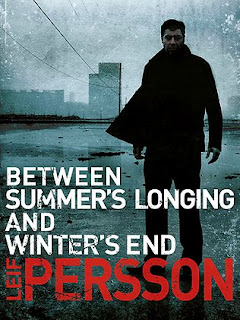 
The first novel in a trilogy that has become the defining account of the unsolved 1986 assassination of Swedish Prime Minister Olaf Palme - an event that still haunts the collective Swedish memory.

Beginning with the death of an unknown American citizen in Stockholm, Leif G.W. Persson slowly unravels the complex web of international espionage, greed, sheer incompetence, and work by a poorly constructed Swedish intelligence force that in this fiction leads to the murder of the prime minister. Between Summer's Longing and Winter's End is a riveting insider's combination of black satire, thriller, psychological drama, and police procedural about the biggest police investigation in recorded history.


I have been looking forward to reading this author ever since Sarah’s excellent Crimepieces blog reviewed his latest book to appear in the UK, Linda, As In The Linda Murder. With “Linda” not available, I had to settle for this book which was ordered up from my local library. As this book has been regarded in some quarters as “one of the best Swedish crime novels of all time” (Expressen), I wasn’t too down-hearted at starting here.


Well, what was the verdict on Persson’s 640 page magnum opus?


Interesting, enjoyable, educational, entertaining, ambitious, demanding, confusing, annoying, irritating, infuriating, very heavy and long; would be a few ways of describing my reactions to the book. I think I oscillated between extreme pleasure at certain passages of the book to a deep funk, where I just wanted it all to end. At one point I broke off from it for a day, in which to read some lighter fare and gain a bit of respite from the brain overload I was experiencing.


Persson has constructed a detailed and in my opinion, in places over-complicated novel, blending historical fact with speculation.  There are multiple viewpoints offered from disparate strands of the Swedish police, secret intelligence services and government insiders. I’ll be honest in places I was confused as to the raison d’etre for certain characters behaving as they did.
We open with the initial police enquiry into the apparent suicide of an American. We discover that the dead man, Krassner is a nephew of a former-CIA agent stationed in Northern Europe during and after the close of the WW2. Krassner's uncle; Buchanan ran the current Swedish PM as an informant and recruiter for the American intelligence services in the aftermath of the war. The US was desperately jockeying to counter-act Soviet influence in northern Europe in this period of time, which marked the onset of the Cold War.
Krassner is preparing a manuscript for publication, having been provided with US secret documents from his uncle's archive. This book when published will expose the PM's youthful adventures as an agent for a foreign power. This and subsequent revelations further on in Krassner's book, would effectively destroy any domestic credibility the PM held with the Swedish electorate.  In the course of completing his manuscript, Krassner has come to the attention of people close to the PM and with some knowledge of his previous history. Has Krassner committed suicide or has he been murdered by elements withing the intelligence community, in an effort to thwart the revelations?
Superintendent Johanssen having received a blind, circuitous communication from the deceased Krassner, and with his curiosity aroused digs into the circumstances surrounding Krassner's death and his unpublished manuscript having been passed the papers from an ex-girlfriend of Krassner when in the States on a work trip. His methodical dissection leads him closer to the truth.
Whilst this strand of the book unfolds and progresses, we also get an insight from the Swedish intelligence services into potential threats to the PM's security from other factions within the country who may have a grievance with him. Chief amongst these suspects are Kurdish nationals suspected of belonging to the PKK. An ongoing theme is also the PM's disregard for high-level protection and his desire to live as normally as possible.


Eventually we arrived at the destination the author intended, but it just seemed to take an awfully long time to get there. Perhaps if there was less detail in a lot of places I would have enjoyed it more. Some of the detail and speculations at times from peripheral characters seemed to serve no other function than to slow the pace of the novel down. Maybe other readers have enjoyed the microscopic analysis and minutiae, for me less would have been more.


A few of the characters reappear in later books and on reflection I will look forward to meeting up with them again. Step forward Johansson and Backstrom.


My copy was borrowed from Leighton Buzzard library.