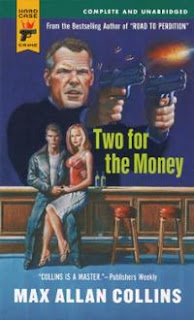 
Nolan was still alive; his wounds were nearly healed and his money was safe – all $800.000 of it. It was Nolan’s birthday and he was sitting happy.


Until Planner was killed. Planner was an eccentric antique dealer; Planner had the $800.000 in his safe. But now he was dead and the money was gone.


Caught up in a sizzling crossfire of double-dealing, danger and death, Nolan was up against the “Family” again. There was only one way out....Blood Money!


This was my second Nolan outing in as many months, with another 6 to follow in the series. Originally published in the 70’s it has the feel of a dime-story novel. I wouldn’t pretend this is the best book I’ve read all week, and it isn’t particularly stand-out in any way at all. The plot is relatively straightforward, Nolan’s money gets stolen. Nolan finds out who it is has taken it and he sets out to recover it. There’s a fair bit of action and violence, nothing too gratuitous or graphic, but most of the characters are a bit two-dimensional.


For all its faults, I enjoyed it. Sometimes it’s enough that a book makes you want to get to the end quickly to see how things play out and without taxing the brain too much. I wouldn’t try and foist this on anyone else, but I am looking forward to the third instalment next month.


This and the predecessor were written quite early in Collins career, and I’m guessing that as he wrote more the quality of his writing improved and subsequent books will be stronger and more enjoyable, but hey - if they stay at this standard, I won’t be screaming for 5 or 6 hours of my life back.


I bought this and the preceding book, as a “Two For The Money” omnibus on Amazon recently.
Posted by col2910 at 00:29