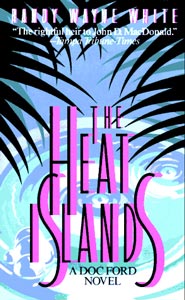 
The eagerly-awaited follow-up to Sanibel Flats from the author the Tampa Tribune-Times calls "the rightful heir to John D MacDonald". When Doc Ford's friend--the simplest and sweetest resident of Sanibel Island--is framed for murder, Doc heads to Florida's dark side to save him and the island from a rising tide of land-grab schemes, blood money, and violence.


This was the second book in Randy Wayne White’s Doc Ford series. It’s interesting how he has been compared to John D MacDonald as spookily enough this is another author who I am endeavouring to read monthly. In MacDonald’s case his highly regarded series involving Travis McGee.


Ford gets involved when Marvyn Rios, one of Sanibel Island’s most hated residents turns up dead and his friend, Jeth Nicholes lands in jail accused of his murder. Nicholes apparent reluctance to plead innocent both puzzles and worries Doc; particularly as he cannot believe the Jeth he knows has it in him to kill anyone. The death has coincided with Rios’s own Tarpon Fishing Competition with its first prize of $80,000.


When the competition is won by Karl Sutter, brother-in-law of Marvin, Ford’s suspicions are roused. Especially when Sutter’s capabilities as a fishing guide and boatman are considered. Rios’s business associates and dealings also merit further investigation by Doc.


In tandem with the investigation, Ford has a burgeoning friendship with Dewey Nye, a young tennis professional that adds an element of personal intrigue to the mystery. There’s also the continuing presence of Tomlinson, Ford’s friend and several other minor characters that appeared in the first book – Sanibel Flats.


Doc Ford is an interesting character. He’s a marine biologist, operating a small fish supply business to colleges and universities throughout the US. In a former life he was an operative in the CIA, an occupation that taught him several skills useful in his amateur sleuthing capacity.  An ongoing theme through the books, I’m guessing will be environmental concerns relating to Florida’s continuing urban growth.  Ford’s day job offers White a platform to highlight some of these issues.  The book was originally published in 1992, 20-odd years ago, I doubt very much the concerns of environmentalists and the impact of continuing population influx and tourism on areas such as the Everglades and the Keys have been pacified much in the intervening years.


I will be reading the next Doc Ford book in May, the 3rd in his series, but it is fair to say the author hasn’t yet over-taken Carl Hiaasen, James W. Hall or John D. Mac in my Floridian league table of favourite authors.