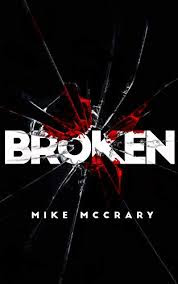 Blinded by an accident. Blindsided by danger.
Riley thought she’d endured the worst, but the violent criminals who took so much from her are back for more.

Dead-set on inflicting as much pain as possible, they’ve set their sights on the only good thing left in her life and will stop at nothing to destroy it and destroy the person Riley thought she’d become. Now she must revisit the worst part of herself to remove the threat and protect the one person who has been there for her.

Broken is an intense short story from Mike McCrary that’ll have you begging for more.

Begging for more hey? Well not really - enjoyable enough but unlikely to remain in the memory banks for too long.

A near blind woman, Riley with her carer Albert in the claustrophobic setting of her home, Riley trying not to bond with the man, but failing. Bits of information teased from each other over the months of his visits. So far, so good until trouble comes a knocking.

Secrets, mental health issues, physical deterioration, memories, a criminal past, a bag of money, a bag of guns, some unwelcome visitors, a trusty blade and some nearly forgotten skills coming back into play, despite her disability.

Worse ways of spending 25 minutes and a decent enough reminder of the author's longer works sitting ignored on the kindle.

Genuinely Dangerous and Getting Ugly have been enjoyed from him before.