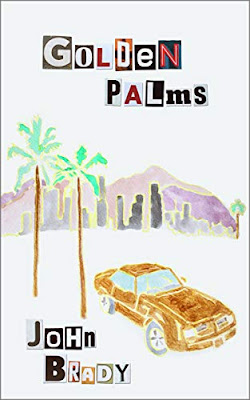 Golden Palms tells the story of Ted Burek, a newly appointed political aide who is looking for redemption in the halls of power. His search won’t be easy.

Ted stumbles on the trail of out-of-town hard boys who have come to LA to make trouble for his boss. To stop them, he must journey through a world of slick real estate developers, bloviating pols, over-confident tech bros and radical bicyclists. Along the way, Ted will discover just how high the price of justice can be.

This isn’t your usual noir. It’s funny in places. It’s about politics. The hero, Ted Burek, isn’t some jaded private dick. He’s not a bitter police detective haunted by ghosts of the past. In fact, Ted’s not a detective at all. He’s a disgraced college teacher who drinks too much, gets angry too easily and tries too often to surf away his problems. But he’s been given a chance to turn his fortunes around. Owed a favor by a friend, Ted gets a job as an aide to LA’s charismatic and popular Mayor, and he’s determined to make the most of this chance to climb the political ladder.

It turns out to be a treacherous ascent. He has to deal with cranky constituents who heat up his phone with their daily and, more often than not, crazy complaints. He has to figure out how to navigate the political currents swirling around Golden Palms, a run-down apartment complex with a wrecking ball in its future and a pack of riled-up residents who want Ted and the Mayor to save their homes and to do it double quick. And then, because this is a story composed in a noirish key, there are the murders. By a gang assassin. Who everyone, including the LAPD, thought was dead. But he’s back on the streets and killing again. “Get your ear to the ground, find out what’s going on and protect the Mayor,” Ted is commanded by City Hall.

It is a mission that pits Ted against bureaucrats schooled in the dark arts of recalcitrance and obfuscation. It propels him into the arms of Lennie. She’s a strident, but beguiling activist with an agenda of her own who wants nothing more than to enlist Ted in the good fight to save Golden Palms. And it puts him square in the sights of some thugs who have come down to the Smog with malice in their hearts.

As Ted gets closer to the truth and further in over his head, he wrestles with whether he should follow Lennie and do the right thing or choose to follow the political winds and take the easy way out.

Wow - that's a blurb and a half and then some!

Golden Palms was a book I enjoyed reading this without it ever really having any major wow factor for me. I enjoyed following the main character, Ted from the loss of his teaching gig to working inside the political machine of the LA mayor, trying to deal with resident's complaints and problems. Most of the problems connected back to a proposed Golden Palms redevelopment, which if I understood the shenanigans correctly was kind of a smokescreen for some unscrupulous businessman with some shady business practices to make money - albeit at some cost to the long-time residents.

Ted takes the gig seriously and tries his best for the complainers, pushing back against stubborn bureaucracy and the constant need for forms, and requisitions and permits before anything ever gets done. He develops a romantic interest in a young community activist, Lennie and he gets close to the police when a string of city murders threaten to jeopardise the mayor's public standing. And in the meantime his interference and enquiries into water problems and earthquakes brings him unwelcome attention from the shady characters in the book.

It offered an interesting insight into the workings of a city, it's top politician and his assistants, with the constant need for the mayor to be seen with his finger on the pulse and compliant to the needs of his constituents, without ever upsetting anyone or supporting anything controversial.

Elements of the plot - the killings and the culprit carrying them out and the role the romantic interest was playing - the motivations for what they were both up to, kind of eluded me. I guess a bit more careful reading or some re-reading of stretches may have offered up the rationales, but I wasn't that fussed to be truthful. They weren't striking enough to bump me out of the book, as I was happy enough to go with the flow and see what trouble Ted got himself into.

The ending of the book after an escalation and plenty of danger for Ted, subsequently seemed a little bit low-key and a fizzle out, rather than a massive crescendo of a climax, but it also seemed in keeping with the pace of the plot before hand. Overall, things take a while to get going here, which didn't bother me too much as the main character was interesting company.

A lot of the city's issues Ted was dealing with concerned water which reminded me of the film Chinatown and with the insider machinations of a political machine, I was also thinking about Robert W. Campbell's Jimmy Flannery books concerning a Chicago sewer inspector who operates as a Democrat fixer in the 27th ward. On that score alone the book was a plus, for the memories it revived.