Nights of the Creaking Bed is full of colourful characters involved in affecting dramas: a girl who is rejected in love because she has three brothers to look after; a middle aged housewife who finds love again but has an impossible decision to make; a young man who can't get the image of his naked, beautiful mother out of his mind; a child so poor he has to hawk onions on Christmas day - and many others. Some, initially full of hope, find their lives blighted by the cruelty of others, or by being in the wrong place at the wrong time, or by just not knowing the "right" people. Corruption, religious intolerance, gratuitous violence, the irresponsible attitudes of some men to their offspring and the importance of joy are some of the big themes that underlie this memorable collection.

Fifteen short stories from Nigerian author Toni Kan, some of which I enjoyed more than others, some I didn't really understand, but on the whole a decent investment of reading time. Much more to like than dislike.

MY PERFECT LIFE ...... first love - found and lost, life goes on, a new life, husband and children, a chance re-union, that old spark, a difficult choice to make - or maybe it was easy...... another one of my favourites, one with an ending which raised an eyebrow  - "I have made my choice. The sound of my own laughter sounds better to my ears."

NIGHTS OF THE CREAKING BED ..... a kept woman, family shame,

THE ECHO OF SILENCE ...... a corpse on the doorstep, an urgent appointment, a false alarm

GOD IS LISTENING ...... a death in the family, a new life - more difficult than the old, love found or so she thought, a pregnancy, an abandonment, a birth, another abandonment, despair, a lack of hope, grief and when you have nothing more to lose - a rape.

BUZZ ..... a homicide detective, a known victim, a murderer to catch

ONIONS ..... a poor boy out selling onions on Christmas Day

THE DEVIL'S OVERTIME ....... family, abandonment, a new-found friendship, a party trick, an early grave or two

THE CAR THEY BORROWED ...... a message, a borrowed car, anxiety, fear, embarrassment, confusion for this reader!

SAD EYES ...... friendship, abandonment - another one where I didn't quite find myself on the same page as the author

THE PHONE CALL GOODNIGHT ..... a family row, a sulk, a phone call, danger, fear and panic turns to relief and joy 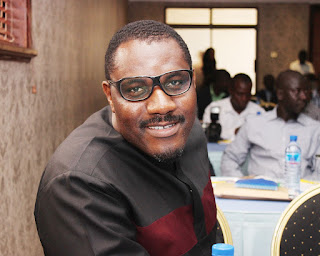 A better than average collection, more enjoyed than not and a wide range of issues covered..... community, suspicion of outsiders, religious intolerance, sex - unfulfilled, forbidden, fatal, forced, first, sneaky, adulterous, families - mainly fractured, damaged, grief, loss, love, poverty, death, murder, and lots more beside, all in a mainly Lagos setting. On occasions the author dips into local dialect, which slightly threw me, but it never served to bump me out of a story.

Toni Kan is the author of the novel - The Carnivorous City