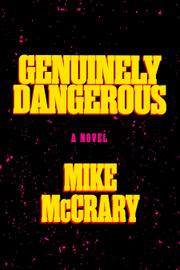 Art is about to imitate a life of crime.

Jasper knows you don’t quit the movie business. The movie business quits you.
He wants back in – Badly.
Needs a comeback – Badly.
And Jasper truly believes he can make a movie Hollywood will want – Badly.

Genuinely Dangerous follows the nightmarish yet hilarious journey of Jasper Tripp, a down-and-out filmmaker who embeds himself in a crew of wild and mysterious criminals so he can film a documentary that’ll land him back in the Hollywood fast lane.

From Mike McCrary, author of REMO WENT ROGUE, comes another unfiltered, unpredictable romp of a thriller where the insane becomes sane and life itself becomes Genuinely Dangerous.

"McCrary's prose practically bounces off the page ... An energetic tale (Genuinely Dangerous) that will make readers root for its disreputable characters."
- Kirkus Reviews

"Either somebody set Chuck Palahniuk and Elmore Leonard up on a blind date or we have a new mad genius on our hands.”
- Peter Farris author of LAST CALL FOR THE LIVING

"A firebomb hurled at Hollywood leaving a trail of death a destruction in its wake. A slapstick crime caper that veers from documentary to action flick to snuff film. Genuinely Dangerous is exactly that - and so is author Mike McCrary."
- Eric Beetner author of RUMRUNNERS and THE DEVIL DOESN'T WANT ME

A week or two after reading this I'm still shaking my head and thinking - what the hell!

Jasper Tripp is a film-maker or at least he used to be. His first venture was a success, his second a bit of a vanity project bombed - his finances taking a dive along with his reputation. Now he's toxic. It's a difficult situation exacerbated by the soaring success of former childhood friend and film school graduate Wilson Gains.

Wilson was like a brother to me. And now?
Well, now, he's kind of a dick?

Catching a shot of himself on TV with the caption under his picture - The Rise and Fall of Jasper Tripp doesn't help. Tripp's in a bad place.

But don't panic, he's plotting a comeback - a documentary featuring some real-life criminals engaging in heists, robberies and stick-ups. He's sold the concept to his brother Alex, not-withstanding some serious reservations and once he's got the finance in place. He's good to go.

We have some absolutely hilarious scenes with Jasper trying to engineer an in with a gang of heisters. ...he meets a crazy lawyer named Remo, who pulls a gun in a coffee shop and we have a bizarre greeting ritual at a Korean massage parlour with Tripp meeting his contact - sans trousers exposure full.

Eventually The Pope sets him up with the Shaw Gang. The Pope gets killed as their introduction. Then the Shaw Gang get taken apart in front of him.

Tripp gets kidnapped and then has to try and sell the deal to the new band of reprobates.

"Are you criminals? I know you're killers......I need filmable crime. Do you commit crimes I can film in order to create an entertaining narrative?"
Blank stares.
It was as if I asked a twelve-year-old boy how to properly work a clitoris.

Tripp's now in the hands of a deranged family of crims - Choke, the patriarch and his three offspring - Harry, Boone and Ruby. And this family has some serious issues.

We may get a film, we may get killed, we may become a part of someone else's plans for an alternate future away from the controls of blood and kin. Read it and find out.

An absolute belter......pace, action, comedy, violence, sex, dialogue, bizarro gross-out moments, with a plot that continually twists and evades you, just when you think you have a handle on it. 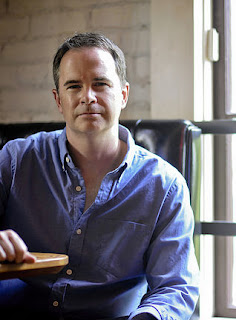 McCrary's narrative voice in the form of our protagonist Jasper Tripp is pitch perfect. I lived his failures, his fears, his humiliations, his wild, crazy romp.

An earlier book by him - Getting Ugly was reviewed here.
Remo Went Rogue still shamefully sits unread on the pile.