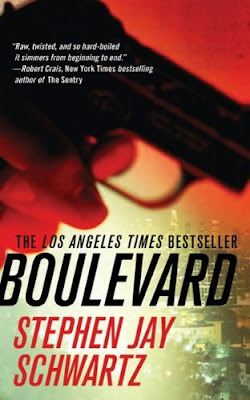 Stephen Schwartz's intensely nonstop thriller is about a LAPD homicide detective who must find a killer responsible for a series of murders that are directly related to him. Los Angeles Police Department homicide detective and former vice cop Hayden Glass is a sex addict. The addiction has ruined his marriage and irreparably damaged many of his relationships.

However, he has always been able to separate his behavior from his career. But, when a series of killings in the L. A. area seem to be meant as a sign just for him, his addiction threatens to ruin both his professional career and his life.

"Raw, twisted, and so hard-boiled it simmers from beginning to end." Robert Crais

Another read from a few months back and my first full length introduction to Stephen Jay Schwartz's cop character Hayden Glass. I've previously had a taste of both from reading the short story - Crossing the Line.

It's always interesting to me when an author portrays a main character that is not especially likable or sympathetic. It's quite a brave move, particularly in a debut novel. Hayden Glass is such a character. A competent, honest homicide cop with a dark side - an addiction to sex. Its ruined his marriage and here when he tackles a killer, the personal nature of the murders endangers his job.

"I am the evidence connecting these crimes."

He wondered if that was his ego talking. Everything revolved around him, of course. There were two things constant with every addict: they had low self-esteem and they were the center of the universe. Hayden remembered the saying that drew a familiar laugh from every addict who heard it - I am the piece of shit the world revolves around.

Dark, brutal, interesting, an often ugly story showing a dark side of LA that the city's tourist board wouldn't want to boast about. Murder, sex, addiction, friendship, broken relationships, attempts at recovery and relapse, and a murder investigation conducted by a damaged cop juggling a helluva lot of balls single-handedly. 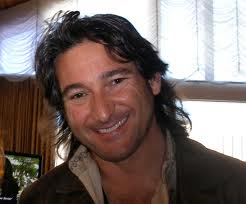 There's a second Hayden Glass novel - Beat which I'll be reading, as soon as I've scrubbed LA's grime from my skin!

Bought copy a couple of years ago.
Read June, 2016