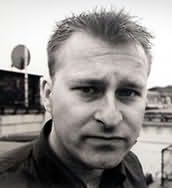 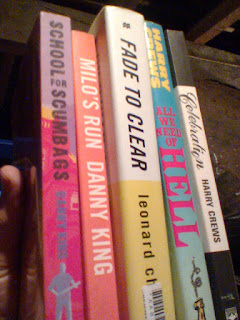 A couple this week from British author, Danny King. I have to confess I don't think I've read much from him since I started blogging. I've been too busy finding new authors to read and collect, rather than concentrating on reading some of my old favourites.


I did read a short one of his three years ago - A 4-King Cracker, but I'll have to dig these ones out when I get into my new house.

Danny King initially caught my eye with his series of diaries which came out in the early 2000s - The Burglar Dairies, The Bank Robber Diaries, The Hitman Diaries and The Pornographer Diaries.
I don't think I've read all of them yet - only two or three from memory.

A couple of Milo books followed them, another Burglar diary in 2009 and a novel Blue Collar in the same year, before he slipped from my radar. 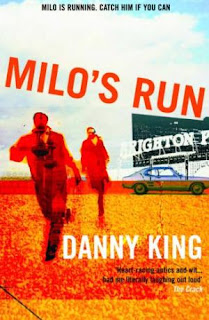 Petty thief Darren Miles has finally scored some real money: a hundred grand in used notes and it's all tax-free. However, if Milo ever hopes to spend a penny of it he'd better shake off the army of angry coppers who are in hot pursuit and more than a little curious as to how he got hold of it in the first place.

Milo and his partners in crime Goody and Patsy have a 30-second head start, a stolen motor and absolutely no idea where they're going. All they know is that they have to get as far away as humanly possible, by any means possible, and that that can't stop... not for a minute... not even for a second.

"A nerve shredding page turner" - The Big Issue in the North


"Hard but not hard-hearted... this book's even better than its predecessor [Milo's Marauders]... an exceptionally funny novel" - The Morning Star

"A gut-wrenching game of hide and seek... my stomach is still in knots from willing Milo and his adolescent fugitives on to escape" - The Crack Magazine 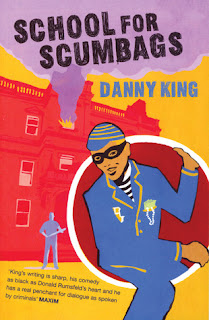 Habitual teenage delinquent Wayne Banstead is expelled from yet another school for sticking up the tuck shop and finds himself hauled off to Gafin School for Misdirected Boys: a special school for special children. It plays host to the worst of the worst, the cream of teenage offending, thieves, bullies, arsonists and flashers. The teachers should have their work cut out, but things aren't quite what they seem at Gafin School. Far from rehabilitating the boys, the teachers seem intent on instructing them in how to get away with things. The pros, the cons and the downfalls are all set out like an algebra equation. Even the school motto is a bit dodgy: Heliarnos Eto Umminass, or Help Yourselves Boys. With careful tutoring, Wayne Banstead and classmates are about to take a step up into the big leagues. But in the big leagues, the big boys play for keeps. With lots of action, swearing and a great big robbery, Danny King's latest is definitely not for kids.