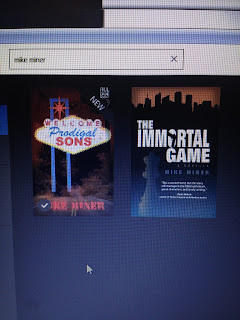 A couple more from the digital stacks on the Kindle this week with 2 from Mike Miner.

I bought one in 2014 and the other one of these in 2015 and kind of forgot about them afterwards. (Note to self, trying reading some of the previously stock-piled books instead of focussing on new stuff all the time!)

I can’t find an author website but he does have a Twitter profile, which is used infrequently - @skyeminer

Both Prodigal Sons and The Immortal Game came out in 2014 in addition to Everything She Knows. His latest, Hurt Hawks dropped in 2015.

In addition, some of his short stories have appeared in a few anthologies – ThugLit, Protectors and Pulp Ink.

Anyone compared to Elmore Leonard or Charles Willeford need checking out in my opinion! 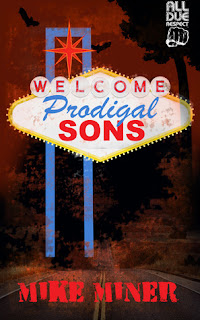 Matthew Flanagan is living the American dream. A plum job at an ad agency. A hot wife. A beautiful home in Southern California. But something is eating him up inside and a nasty drinking habit is about to cost him everything. After his life finally collapses around him, Matthew disappears to Vegas with a girl he barely knows. When word reaches the Flanagan clan back in Connecticut, Matthew's brothers Mark and Luke are sent on a mission to find their brother and bring him home. It's a longer and darker journey than either of them planned on. At turns funny and moving, Prodigal Sons is a hard-boiled American odyssey. A family saga with the heart of a crime novel.

"The work of an extravagantly talented writer, Prodigal Sons is one of the best debut novels I have ever read.” --Sterling Watson, author of Suitcase City, Fighting in the Shade, and Sweet Dream Baby.

"Miner’s wicked electric chair humor calls to mind the best of Elmore Leonard and Charles Willeford." -- Patrick Michael Finn, author of From the Darkness Right Under Our Feet and A Martyr for Suzy Kosasovich. 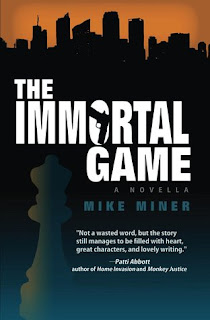 When mobster Richard "Red" Scarlotti's son goes missing, Dylan Thomas Lonagan, a private detective with truckloads of baggage, is hired to find him, and lands himself in the middle of a mob war. As two crime families try to settle old scores, Lonagan is forced to ally himself with Red's hitman brother, Whitey, a hard nut with a soft side and a secret of his own. Together, Lonagan and Whitey make a dangerous, desperate team. Searching to find the missing boy, they dodge bullets from cold-blooded assassins and daggers from the women they love, only to discover that, sometimes, the two are one in the same.

In the end, these dirty saints will learn that the road to Heaven is paved with bloody hands and bad intentions.