Bob Dylan wrote the classic song "Knockin' on Heaven's Door" and thereby unforgettably marked the passing of an otherwise insignificant character in the movie "Pat Garrett & Billy the Kid".

Brendan Gisby has written this utterly beautiful novella to honour the short life of his father, a man of seemingly as little significance.

The story is narrated with haunting subtlety, rhythm and depth of feeling by his teenage son as he takes a bus ride back to school for the first day of a new term, where he will have to announce his father's sudden death and deal with the resultant reactions without bursting into tears. He also has to come to terms with the fact that, on reflection, there is a huge amount he doesn't know about his father and that all he is really left with are snippets of personal memories.

Make no mistake, THE BOOKIE'S RUNNER is a modern masterpiece. In writing it, Brendan Gisby has not only honoured his father, he has ennobled him.

An enjoyable read with Brendan Gisby's emotional account of his father's life, drawn from his childhood memories.

Shared experiences of a man he loved but didn't have the chance to really get to know. There's the pain and love and resentment and anger that is present in all families.

The Gisby's were poor. The father worked a couple of jobs while the mother exhibited a blatant disregard for budgeting. Money was spent faster than it was earned. We join Brendan and his father searching the beach for Forth Bridge money thrown off the passing train by passengers for good luck.
Scrubbing the coins later at home and the tsk'ing of his mother, with his father proclaiming there's no shame in being poor.

Other memories......... a gardening job with his father and the humiliation Brendan felt at his treatment by the lady of the house and the innate understanding his father had for his feelings; the raging toothache and pain his father felt and the "miraculous" finding by his sister of the money to pay for treatment and the days as a bookie's runner, filling in for his dad while he lay in a hospital bed; finally the end and the passing of his father and the way he dealt with adversity. 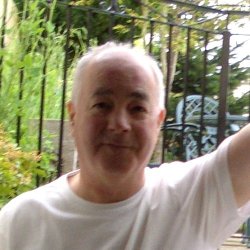 Brendan Gisby has been read before - The Burrymen War.