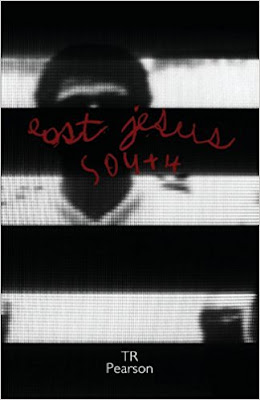 Meet Buck Aldred, a former big-city homicide detective who has opted for a quieter and simpler life in the Virginia Blue Ridge. That was the plan anyway. When Buck noses around in an old missing persons case by way of returning a favor to a neighbor, he unearths more corruption and criminal mischief than he ever suspected the rugged uplands could hide. A departure for T.R. Pearson, East Jesus South is not a comedy. It’s a creepy, unsettling look at the rot beneath the honeyed, 'Aw Shucks' veneer of the American South.

Hard to do this book justice in a few sentences, but I'll try.

Setting - backwoods Virginia and a tale told in three alternating viewpoints. Buck - a retired detective earning his corn now mainly chasing car repossessions or following up on matrimonial discord; P. J. - a young reporter trying to carve out a career for herself and Buddy - the creep and villain of our tale.

Buck after a seemingly chance encounter with Mickey Dunbar, gets persuaded to look into the disappearance of Mickey's daughter Kiki, many years previously.  The case is cold. After reviewing the original investigation, re-interviewing witnesses and the cop who conducted the initial investigation, it’s apparent it never rated any higher than tepid at best, even in the days immediately after Kiki vanished. Buck tells Mickey he’s wasting his time and money, but Mickey won’t let it drop.


P. J. our reporter, gets wind of Buck’s enquiries and has a few revelations for him – namely that other young women have gone missing and she feels there’s a possible link. True - false? We'll find out eventually.

Our third voice, places us inside Buddy’s head – and it’s not a pleasant place to be.

Pearson skilfully weaves the three narratives together creating a fantastic story - a superb mystery, populated with credible, memorable characters, not just the leads – Del, the short-order cook at the diner and Calvin the tire guy, just two for example – have a depth to them even though they are only encountered fleetingly.

Impressive, dark and believable, a great sense of place, with some lovely writing and not short of a touch of humour in places ….

“What do you do, Buck?” Mickey wanted to know.
I said like always, “This and that.”
“Which one did Del get -- this or that?”
“Repo job.”  Toot brought our coffee.  “I helped the tow guy find him.”
“You a cop or something?”
“Used to be.”
“Quit?”
“Retired. Got shot.”
“Sounds exciting.”
It did sound exciting.  It hadn’t been though. Me and my partner had stopped in at Grey’s Papaya for a couple of hotdogs.  The one in the Village that attracts chiefly hipsters, cabbies, and nasty vagrants.  A homeless guy had come in to plague us while we were trying to eat.
We’d been newly assigned together and were only in our second week.  My partner’s name was Rinzo, and he was fat and lazy and stayed down in his back.  When the homeless guy asked him for a dollar, Rinzo tried to shove him but missed. He lost his balance and lurched and stumbled, bounced his Sig out of his holster. It discharged when it hit the floor and put a round straight in my ass.

Not least a little sad and thoughtful either, as the impossible happens and Buck and P. J. give us answers to Kiki’s fate.

My first time with T. R. Pearson but definitely not my last. 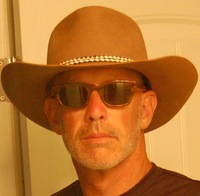 T. R. Pearson has published about 15 or 16 novels, as well as a few under the pseudonym Rick Gavin.

He has a Goodreads page with blog here.