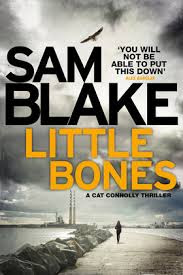 Attending what seems to be a routine break-in, troubled Detective Garda Cathy Connolly makes a grisly discovery: an old wedding dress - and, concealed in its hem, a baby's bones.

And then the dress's original owner, Lavinia Grant, is found dead in a Dublin suburb.

Searching for answers, Cathy is drawn deep into a complex web of secrets and lies spun by three generations of women.

Meanwhile, a fugitive killer has already left two dead in execution style killings across the Atlantic - and now he's in Dublin with old scores to settle. Will the team track him down before he kills again?

Struggling with her own secrets, Cathy doesn't know how dangerous - and personal - this case is about to become...

Another new author for me this time around and an Irish police procedural from Sam Blake, one which has garnered praise from the likes of Ken Bruen and Alex Barclay.

I wouldn't class myself as the world's biggest fan of this type of crime fiction, but I've read a few of late and this was another enjoyable read without threatening to be the best book I've ever read.

Blake serves up a burglary where the initial Gardai attendance soon escalates into an investigation of more serious proportions when an infant's bones were found stitched into the hem of a wedding dress. We have a female detective, Cathy Connolly who is our main character. Connolly is based in Dublin where most of the plot unravels. A fair bit of time is spent in London with a few other prominent characters, though it does take maybe half the book before everything intersects and what have previously have been viewed as separate story strands gradually intertwine.

Added to the mix is the appearance in Dublin of a suspected killer, on the run from the States, plus the sudden death - from natural causes apparently of the wedding dresses original owner.

Connolly gets deeply involved in the case and is troubled from the off, particularly as she has some personal issues which are bothering her. There's an interesting relationship between Connolly and her boss DI Dawson O'Rourke. As the novel unfolds we get a bit of their backstory and a feel for the mutual respect and concern for they have for each other, in part from a shared traumatic experience previously. There's never a suggestion that their relationship is anything other than professional.

Our story unfolds...... Zoe, the victim of the initial break-in is an artist, just about to be Dublin's next big thing...... an exhibition imminent and a possible developing romance with an entrepreneur who is also known to Connolly. A lot of her family history is unknown to her. Her mother left when she was very young. With the death of her grandmother, the scope for uncovering the past and discovering who the infant may have been is thwarted by an old family friend of Zoe's grandmother - a Cruella de Vil type - Trish O'Sullivan - the keeper of the keys to the family's secrets. She's not giving them up lightly!

Meanwhile in London, who is the confused old women who keeps mistaking Emily Cox (another character of some significance to the unfolding of our tale) for a messenger?

For large parts I couldn't see how A was going to connect to B and what the significance of C was to the narrative, but in the end it all comes together cohesively in a fairly convincing manner.

I'll own up to some irritation with the author during the read. There's something kind of hinted at, more than once which leads you to believe a certain event took place, which hadn't. I didn't feel annoyed because of the less than subtle subterfuge, just kind of - what's the big deal, why waste time on this? Lastly the very ending of the book, our case is already resolved (though I can't remember the raison d'etre for sowing some of the bones into the dress - if it was covered, I clearly wasn't paying attention) where the author sets a hook for reader's to come back in the second book and see the outcome to our dramatic incident. It kind of felt like an afterthought and a bit unnecessary.

I did like the book and it read fairly quickly for 400-odd pages, but I'm ambivalent about reading any more from the author at this stage. 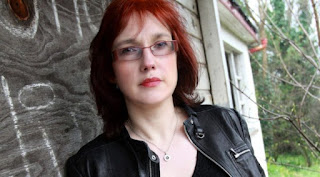 Sam Blake is an English author, who has lived in Ireland for a fair few years. There's a second Cat Connolly book - In Deep Water which was published a month ago. (Sam Blake is a pseudonym for Vanessa Fox O’Loughlin.)