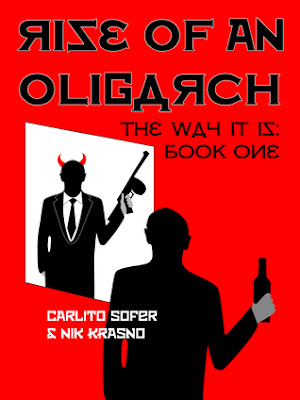 When Ukrainian oligarch Mikhail Vorotavich is close to achieving his ambition of topping the Forbes rich list, an assassination attempt leaves him in a coma and his vast business empire rapidly descends into turmoil.

Aspiring to get legit he moves to London, but behind his new pretended façade nothing really changes. And the higher Mikhail climbs the wider is the circle of enemies that want him dead.

Meanwhile, his partners, in a quest to discover who is behind the attack, stumble upon a conspiracy that, if realised, would change the world order. The mighty adversaries will stop at nothing.

Conspiracies, old scores, powerful enemies and the blurred lines between decency and corruption all surface.

Packed with remarkable characters and exotic scenes, humorous and philosophical at times,

Rise of an Oligarch is a thriller set against the background of a young Ukrainian state striving to embrace capitalist democracy.

Rise of an Oligarch is the book that oligarchs do not want you to read.

Another first for me with a reading visit to the Ukraine and Israel in the hands of authors Carlito Sofer and Nik Krasno.

Our book is concerned with the life of Mikhail Vorotavich. We open with an assassination attempt on him. Our chapters then zip back and forth from Kiev 1977 and our protagonist's childhood to the present day - from childhood poverty to successful businessman – albeit now a man with a bullet in his brain.

An interesting enough journey – Mikhail’s life under communism, life as a Jew in an oppressive society, exposure to corruption at an early age and the mental aptitude to always be working an angle to get one rung higher on the ladder. We see how deals get done under the Soviets and we have a long memory for those who cross us. Street smarts developed as a kid, serve him well on his inexorable rise through Ukrainian society to the ranks of the billionaires.

Mikhail’s not a nice person – happy to extort and manipulate and eliminate (or at least have it done on his behalf) – probably your typical Oligarch then. Happy to cheat, happy to boast; he’s not without some redeeming qualities either - a fierce loyalty to friends and family.

My main difficulty was I didn’t feel an emotional connection to Mikhail, so I was an indifferent observer to the events in his life. I didn’t rejoice when he overcame adversity, out-witted a vicious street thug, scored his first million, so neither did I weep when he get shot. Maybe I just don't like rich people?

The dissection of events leading up to the assassination attempt and the perspectives from Mikhail’s inner circle were portrayed well and there was an interesting twist thrown in at the end, one which will have me reading the second in the series – Mortal Showdown at some point.


Nik Krasno was kind enough to send me this one for review.

I can't locate an author website, but there's a couple of other reviews and an interview with him here.
Posted by col2910 at 00:10