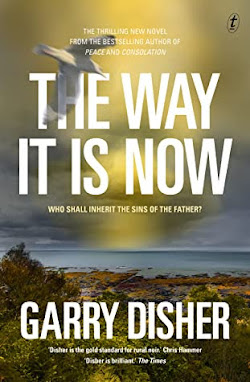 Synopsis/blurb...
TWENTY YEARS AGO Charlie Deravin's mother went missing near the family beach shack - believed murdered; body never found. His father has lived under a cloud of suspicion ever since.
Now Charlie's back living in the shack at Menlo Beach on disciplinary leave from his job with the police sex-crimes unit, and permanent leave from his marriage. After two decades worrying away at the mystery of his mother's disappearance, he's run out of leads.
Then the skeletal remains of two people are found in the excavation of a new building site - and the past comes crashing in on Charlie.
The Way It Is Now is the new enthralling novel from Garry Disher, one of Australia's most loved and celebrated crime writers.
Slow, thoughtful, melancholy, impressive.
Probably one of the best books I'll read this year and one I shall save for a re-read, because let's face it I've got time (working on the assumption here that I stop acquiring more books and I'm going to live to the ripe old age of 249).
There's a kind of dual-timeline feel as we are concerned with main character, Charlie Deravin present day and events of twenty years ago when Charlie's mum went missing. These events have cast a long shadow over the Deravin family. There's no closure as there's no body. His father was suspected of doing away with his mum. His brother believes the rumourss and resents his dad, Charlie doesn't but there's a lingering tension in the relationship between the two brothers.
Present day, Charlie has issues to deal with. Marital failure, working on his relationship with own daughter, a work suspension, enforced therapy, a new romance - one which may not have been the wisest thing to embark on, his father's health, and the itch that he can't scratch and which just won't leave him alone - answers to his mother's disappearance.
I really enjoyed this one. There's no real urgency to the narrative which suited me fine. I liked the mystery, I liked the tension it had wrought on the family and the affect it had on them individually and collectively. I could sympathise with both brothers and their differing reactions towards their father. With the Deravin parents in the throes of a separation/divorce at the time of the mother's disappearance, the boys would be re-evaluating their relationships with their parents anyway.
There's also a subtle menace to the community, more past than present with a dominant police element, of which the Deravin's were a part of. Work hard, play hard. There's a lot of testosterone and peacocking and alpha male behaviour. Some of this has dissipated over time, but it still lingers.
The remains of two bodies are found. Things start moving. Answers arrive.
5 from 5

I really like Garry Disher's work, but like a lot of authors. I just don't read him often enough. Reading records tell me I've only read him twice on the past dozen years. WTF.
Two-Way Cut and The Heat. Pretty sure there have been more, probably before I starting keep records in 2010.
Read - January, 2022
Published - 2021
Page count - 416
Source - purchased copy
Format - paperback
Posted by col2910 at 22:32