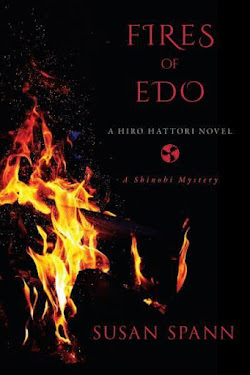 Synopsis/blurb...
Edo, February 1566: when a samurai’s corpse is discovered in the ruins of a burned-out bookshop, master ninja Hiro Hattori and Jesuit Father Mateo must determine whether the shopkeeper and his young apprentice are innocent victims or assassins in disguise. The investigation quickly reveals dangerous ties to Hiro’s past, which threaten not only Edo’s fledgling booksellers’ guild, but the very survival of Hiro’s ninja clan. With an arsonist on the loose, and a murderer stalking the narrow streets, Hiro and Father Mateo must save the guild—and themselves—from a conflagration that could destroy them all.
Fires of Edo is the eighth book in Susan Spann's Shinobi mystery series. Fair to say, I don't think I've read anything like it previously, at least as far as the setting of 16th century. Japan is concerned. (16th century anywhere for that matter.)
We have two travellers happening upon a fire in a village. After assisting at the scene, they stop to investigate it. This brings them into contact with a figure from one of their pasts. From what I understand, there is an ongoing dispute or feud between two rival sects, which is probably an over-riding series arc.
A few months on I'm struggling to remember too much about the book to be honest, though I can recall some of the feelings it evoked in me. I enjoyed the dramatic change of setting from my usual reading. Historic mysteries don't hold a particular attraction for me as I kind of lack the imagination to want to immerse myself in the past. Susan Spann had me enjoying the book though. I liked seeing this peculiar, alien world with it's different food, customs and rules of behaviour.
The main characters were good company and the story had enough excitement to have me not counting down the pages until the end. There are a few twists and turns and dramatic incidents before an ending which satisfied me and tied up all the questions presented earlier. Who did what and why.
While I wouldn't put it up there as one of my most enjoyable reads of the year, I am interested in re-visiting the series in the future. That's usually the benchmark of whether I've enjoyed a book or not. Do I want to read more from the author about the same characters? Yes. Which is fortunate because I have a few of the earlier titles on the pile.
Setting - a plus, story - a plus, characters - developed, a plus. Writing - enjoyable.
Overall 3 from 5

(Note to self, try not to leave such a long gap between reading something and trying to put together some intelligent thoughts.)
Read – February, 2022
Published – 2022
Page count – 230
Source – review copy from Saichek Publicity
Format – PDF read on laptop
Posted by col2910 at 05:22