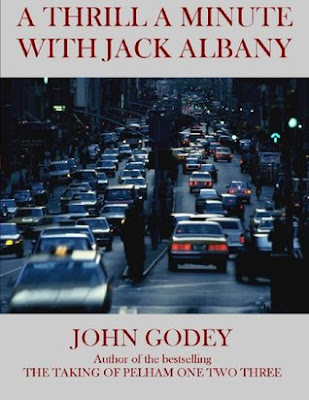 Jack Albany’s world is turned upside down when he is mistaken for muscle from the mob. The actor is sucked into the world of organized crime as the gangsters he has taken up with plot the kidnapping and ransom of the mayor of New York City for a cool $10,000,000. Jack must find a way out of the gang and secure the safety of his new love, Sally.

About the Author: John Godey is the author of many crime and mystery novels, including Nella, The Snake, The Talisman and the international best seller, The Taking of Pelham One Two Three, was released as a film of the same name, starring Denzel Washington and John Travolta

I've had a couple of author John Godey's books on the TBR pile for a good while now - The Taking of Pelham One Two Three and The Three Worlds of Johnny Handsome - without ever actually getting around to cracking the spines on them. I spotted his books available through Kindle Unlimited and thought I'd give his two Jack Albany books a whirl. The premise to this one and Never Put Off Till Tomorrow What You Can Kill Today sounded interesting and the fact that neither of them seemed to have any reviews also attracted me.

It's a light-hearted caper of sorts. Actor Jack Albany is out walking late one night when he is followed. As his pursuer closes in, he turns and is approached by another assailant from a different direction. The two grapple with Albany the kind of meat in a brawl-sandwich. Assailant B stabs Assailant A and insists Jack goes with him. It's a case of mistaken identity as Albany is assumed to be a mob button man brought in to assist in a big job.

Albany is taken to an out of town estate where he has to bluff and blag his way through meeting the big boss, his beautiful art teacher, the boss's nymphomaniac wife and assorted members of the gang, one of whom takes an instant dislike to Jack and fancies settling their differences with violence. His acting skills are truly tested when the real Ace Williams, hitman extraordinaire turns up.

While he is trying to save his life, and avoiding killing any cops or villains, not kidnapping the mayor or succumbing to the wiles of the randy wife, he's also falling for Sally, the art teacher. It could be the start of a beautiful romance if they can extricate themselves from mob danger.

Humorous, but never laugh out loud funny. I did enjoy it without being blown away by it. There's never really any great tension in the book, as Godey has Albany mugging for laughs for the most part.