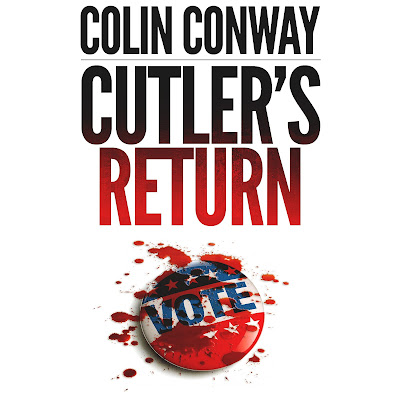 Synopsis/blurb....
How far would you go for the person who broke your heart?
When a past love calls for help, John Cutler returns to Seattle. He didn’t want to go, but she offered the one thing he needed more than distance from her—money.
After the former cop arrives in the Emerald City, old feelings resurface, and new lies are told. Soon, Cutler doesn’t know which way is up, and that’s a dangerous place to be.
For influential people are in the orbit of this past love, and they want to silence a secret she keeps. Money and political connections lead to corruption and intimidation. Murder is only a heartbeat away.
As he gets closer to the truth, does death await Cutler?
Cutler’s Return is the first book in a new crime fiction series from Colin Conway, the author of the 509 Crime Stories and the Flip-Flop Detective. If you like fast-paced crime fiction and heroes seeking redemption, then you’ll love this page-turner.
Grab Cutler’s Return today and join the action!
Cutler's Return is the first in a new (well, a year old now) series from speedy wordsmith author, Colin Conway. I read and enjoyed a few months ago.
John Cutler answers a call for help from a former love, someone who was indirectly involved in events which culminated in the ending of Cutler's career as a cop. Cutler got involved with stripper Paige and coincidentally or not his life went down the toilet soon afterwards. A falling out with his partner, an altercation with an IA cop, an allegation of wrong doing, an investigation into his conduct as well as a hair-trigger barely controllable temper and a poor attitude sees Cutler leave the force and the city of Seattle.
Paige calls him out of the blue. She offers him money to recover a file that has been stolen from her. Cutler against his better judgement returns. Bad move. His former love is spinning him a yarn. Shortly afterwards she is murdered and despite no experience as an investigator, Cutler sticks around to try and find out why.
I enjoyed the story here, even if at times I didn't actually like the main character, John Cutler. He displays levels of immaturity that don't always make you sympathetic towards him. He's impulsive, lacks control and as a result makes some poor choices, maybe more in his past than the present. He's definitely got some growing up to do and probably by the end of the book he has done some, particularly in re-establishing a relationship with his formerly estranged young daughter. I guess it's more realistic having a main character with flaws as opposed to the Peter Perfect persona you sometimes get with fictional heroes.
We have a murder mystery, an investigation, some conflict and action and an almost dual timeline narrative, with events from Cutler's past revealed. This backstory helps establish some of the characters and connections for the present day story.
I liked the relationship dynamics in the book. Cutler and Paige, and especially Cutler with Daryl Crites the IA officer who he crosses paths with quite frequently. It's probably fair to say they won't ever become drinking buddies.
Overall an interesting and enjoyable series opener. 4 from 5

Colin Conway is one of my favourite new discoveries of the past couple of years. I've enjoyed his Cozy books, some of his Strait stories, the co-authored Charlie-316 books (with Frank Zafiro) and now Cutler. I still need to try his 509 series.
Read - March, 2022
Published - 2021
Page count - 298
Source - review copy from author
Format - Kindle
Posted by col2910 at 02:15