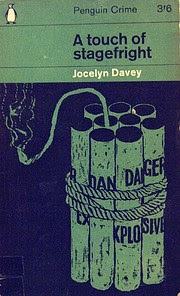 Jason Forsyte had been described as the Beelzebub of Broadway - the Stalin of the Stage - the Voodoo of Vaudeville... though not by a well-wisher (if indeed there were any). When his house on Lighthouse Island, near New York, was blown up with dynamite one evening, Jason went up with it, bequeathing a nice riddle for Ambrose Usher to solve. Ambrose, a fellow of the Innes-Crispin college of academic sleuths, had already met many of the playwrights, actors, and undercover agents who were week-ending on the island. Each one seemed to have some sensitive pint of contact with the late Jason. But which one pressed the plunger?

A book that I could quite happily gone through my life blissfully unaware of its existence, but which was discovered when trying to locate something in the genre of crime and mystery fiction with a character name beginning with 'U.' All in the pursuit of completing Goodreads reading challenge.

Author Jocelyn Davey penned seven Ambrose Usher mysteries, across four decades. This one looked ok without screaming to be read. I don't believe I will be seeking out the other six.

Its a short book thankfully and it takes a long while to get set up. Davey takes about a quarter of the book to introduce Usher and a cast of characters, mainly with theatrical backgrounds to an island located off the New York - Connecticut coastline. On or around page 60, Jason Forsyte mentioned but never seen gets blown up.

Usher digs into it, even though his whole raison d'etre for being on the island is some sort of espionage undertaking for the British. Namely keeping an eye on a couple of previously encountered (earlier book, maybe?) suspicious French types.

I've read worse, but it was a bit dull and pedestrian with a few quirky characters - theatre types, hyperactive adventurous children and a few people with secrets, pasts and possible motives for doing the dastardly deed. One of my main issues was not really knowing the victim. Everyone had an opinion on him and a few disliked him enough to wish him harm, but apart from one revelation which admittedly didn't paint him in a great light, I found it hard to care about his demise. Once that happens, it's just really a case of turning the pages.

I didn't loathe it and Ambrose Usher is a thoughtful investigator. He doesn't jump to conclusions. A lot of his progress towards the guilty party is comprised of patience and observing people, a lot of the time at parties and in social situations. There's are a few enquiries made back in New York. In the end, the killer reveals himself anyway because of circumstance. 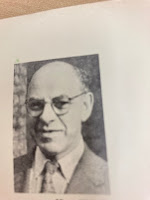