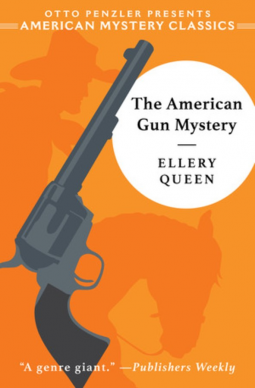 When a Western star is gunned down at a rodeo, Ellery Queen saddles up.

Buck Horne has roped thousands of cattle, slugged his way out of dozens of saloons, and shot plenty of men dead in the street -- but always on the backlot. He is a celluloid cowboy, and his career is nearly kaput. The real box office draw is his daughter, Kit, a brawling beauty who can outshoot any rascal the studio has to offer. Desperate for a comeback, Buck joins Wild Bill Grant's traveling rodeo for a show in New York, hoping to impress Hollywood and land one last movie contract. But he has scarcely mounted his horse when he falls to the dirt. It wasn't age that made him slip -- it was the bullet in his heart.

Watching from the stands are Ellery Queen, debonair sleuth, and his police detective father. They are New Yorkers through and through, but to solve the rodeo killing, the Queens must learn to talk cowboy.

Author Ellery Queen was actually a pen-name for a double act comprised of two cousins, Frederic Dannay and Manfred Bennington Lee. One provided the plot ideas and the other did the writing. Which was which? Not sure and I'm not really interested. The name Ellery Queen has lived on well past the two cousins and mainly because of the famous mystery magazine. I was keen to try one of their books at some point and this one seemed a good place to start, with some cowboys in New York.

We have Ellery Queen the author with a main character of Ellery Queen, an investigator who assists with but actually drives the case run by Inspector Queen, his father. I kind of got the feeling Queen Snr has been promoted above his abilities. He's just a prop for Jr. to show off his abilities as a detective. He's good at shouting at underlings and organising searches, but displays no investigative skills.

We have a murder in plain view of 20,000 people at the opening of a rodeo in New York. Despite searching all of the crowd the weapon has disappeared and we have no murderer. After a period of time while the show is shut and the crime investigated, a second identical murder occurs when the event reopens. Ditto a missing weapon and culprit.

Queen Jr. does his thing and after about 300 pages we get the answers. And the author(s) speak(s) to the reader ahead of the denouement asking if we have solved things because all the clues are available to us to do so.

Along the way we have ballistics tests, matching pistols, searches, interviews, a romance, a boxer, a manager, a money man, a prizefight, an inheritance, some missing money, and probably a few more things I've forgotten.

I didn't hate it, though it was a bit slow to get going. I didn't love it either. It's one of those books that you feel no real emotion or connection to any of the participants - victims, family, friends, witnesses or detectives. If you don't particularly care, it's just a puzzle where the author gets to show how clever he is.