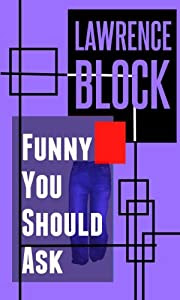 Synopsis/blurb...
"Funny You Should Ask was written during a month-long stay at a Rodanthe NC motel, on the Outer Banks. A long fishing pier extended into the Atlantic, and every day I fished from it, and every night I dined on what I'd hauled out of the water. I couldn't get anywhere on the book I was supposed to write, but I turned out a batch of short stories. "Funny You Should Ask" was one of them. "Sometimes They Bite" was another.
I sent them to my agent, who inquired of a mutual friend. Had he heard anything of me? Did he know how I was doing?
My friend hadn't, and wondered at the question.
"Well, I've been reading the stories he's been writing," my agent said, "and I get the feeling that maybe he's been alone too long."
I can't argue the point. But I've always liked the story. AHMM ran it some ten months after I wrote it, and Fred Dannay (who never met a title he didn't want to fix) changed this one to "A Pair of Recycled Jeans." Which wasn't terrible, but I'm as obdurate as Fred was, and when I had the chance I changed it back. It's been anthologized a bunch of times, and appears in my collection, "Sometimes They Bite," and my short fiction omnibus, "Enough Rope."
Enjoy!
Another short offering from Lawrence Block courtesy of a Kindle Unlimited subscription. I think I'll spend some time scouring what is available from him on the service over the next few months. Why? Well it's Lawrence bloody Block innit. That's why.
This particular story seemed familiar though a little bit elusive. The gist of it only coming back to me a fraction of a second after I'd read it. 99% certain this one was encountered before.
A man wonders where perfectly worn pairs of secondhand jeans are sourced from. They're too good to be thrown away. The store owner buys them in, in bulk but doesn't know his supplier's source. The cost/profit ratio intrigues our man and is a bit of a conundrum because they only sell for 6 bucks. Our curious traveller gets his answer before the end of the tale. Not that it will do him much good.
Not sure I'd want to share headspace with Mr B when he was conjuring up this one.
4 from 5
The story sells for a couple of quid (at time of writing) and while the author won't get rich if you buy it and you won't get poor either, it might be a better investment hoovering up his Enough Rope collection, or having a butcher's at this via Kindle Unlimited.
Fun was had for a quarter of an hour while reading and at least an hour on and off subsequently, while shaking my head at Lawrence Block's imagination and skill.