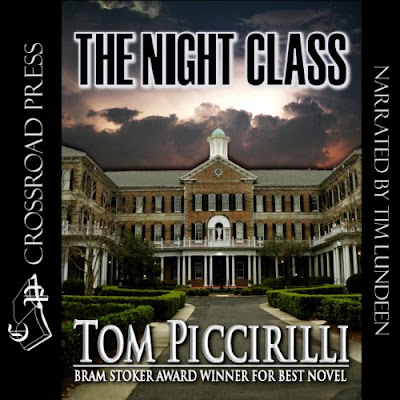 Synopsis/blurb...
The college winter break is over, and Caleb Prentiss faces yet another semester of higher education. Struggling with alcoholism and frustrated by his irrelevant classes, Cal seeks solace in the arms of his scholastic-conscious girlfriend and in somnambulistic conversation with a mystifying college radio DJ.
But Cal's ennui is shattered when he discovers evidence of a murder which occurred in his room over the Christmas recess. Obsessed with unearthing the particulars of this gruesome and haunting event, Cal wanders down the grotesque hallowed halls of a university gone mad.
Run-ins with the two hard-nosed campus security guards, relationship hurdles with both friends and lovers, and enigmatic signals from the Dean's icily eminent wife force Caleb to question his place in the bizarre night classes of higher education.
Even as he gets ever closer to the truth, Caleb is plagued by the supernatural occurrence known as stigmata: his hands bleed in imitation of the wounds of Christ whenever someone close to him dies.
And Cal's hands are bleeding a lot these days.
My third Audible outing with the late Tom Piccirilli in the merry month of May and this one was my only slightly disappointing read. The Night Class was sandwiched either side of two cracking novellas - You'd Better Watch Out and All You Despise. It was a bit of a surprise considering this one won a Bram Stoker Best Novel Award.
I found the story a bit plodding and less than captivating. I liked the backdrop of the college and the main character, Cal was sympathetic. I enjoyed some of the incidents in the book and the relationship dynamics between Cal and a few of the minor characters in the book, but I did continually wonder while listening, what was the actual point of it all?
I don't think it was the crossover of genres from a crime like feel with an unexplained murder of a student, into horror/supernatural with stigmata that bumped me out of the book either. There's a kind of cult feel to the book, as the college freaks, including the hierarchy try and indoctrinate Cal into joining them. 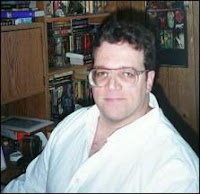 Decent writing, decent setting, interesting (for the most part) and developed characters, just not much else for me to get excited about. I've read far far worse in my time, and undoubtedly will do again. And it wasn't one that I ever considered giving up on as my ears never started bleeding. I just didn't vibe it.
2.5 from 5
Read - (listened to) May, 2022
Published - 2000
Page count - 247 (6 hrs 33 mins)
Source - Audible purchase
Format - Audible
Posted by col2910 at 09:03