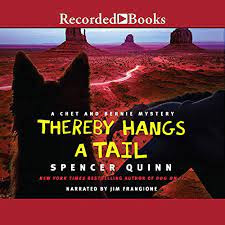 Synopsis/blurb ....
The second book of an irresistible series narrated by a loveable and wise dog. In the newest Chet and Bernie mystery, Chet gets a glimpse of the show dog world turned deadly.
"We run a detective agency, me and Bernie, called the Little Detective Agency on account of Little being Bernie's last name. My name's Chet, pure and simple. Headquarters is our house on Mesquite Road, a nice place with a big tree out front, perfect for napping under, and the whole canyon easily accessible out back, if it just so happens someone left the gate open. And then, up in the canyon -- well, say no more."
Praised by Stephen King as "a canine Sam Spade full of joie de vivre," Chet and his human companion Bernie have both had some setbacks in life -- Bernie in combat, Chet in K-9 school, but together they make up a team like no other. In Thereby Hangs a Tail, Bernie and Chet are called on to investigate threats made against an unlikely target -- a pretty, pampered show dog named Princess. What seems like a joke turns into a serious case when Princess and her owner are abducted. To make matters worse, Bernie's on-again, off-again girlfriend, reporter Susie Sanchez, disappears too. When Chet is separated from Bernie, he's on his own to put the pieces together, find his way home, and save the day.
With genuine suspense and intrigue, combined with humor and insight into the special bond between man and dog, Thereby Hangs a Tail will have everyone talking.
Second in the series after the opener, Dog On It and Thereby Hangs a Tail was enjoyed nearly as much as the previous book. Again there's a cracking narration from Jim Frangione which has the story bouncing.
There's something endearing about seeing things from a canine's perspective. The observations on all things human are acute and hilarious, though Chet probably doesn't philosophise too long on things. A smell, or a biscuit or a perp to chase will have him losing his chain of thought fairly quickly.
Dog shows, high end competition, a bodyguarding gig, money issues, a missing owner and pooch, a missing journo/kind of girlfriend, an Italian count, desert hippies, death, small town police corruption and a busy case which yet again sees our lovable double act eventually getting to the bottom of things.

A series I would like to continue with at some point, but sadly it seems like only the first two made it to Audible. I'll be seeking out print or Kindle copies when I need another infusion of canine high jinks into my reading.
Spencer Quinn, aka author Peter Abrahams is well worth some attention.
4 from 5
Read - (listened to) September, 2021
Published - 2009
Page count - 324 (9 hrs 30 mins)
Source - Audible copy from Audiobooks
Format - Audible
Posted by col2910 at 05:17