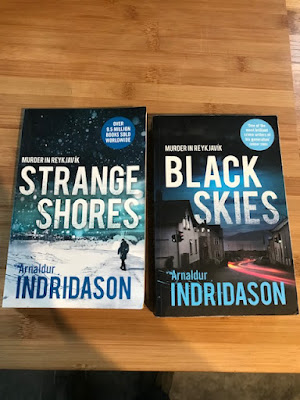 Scandi crime is one of those genres within the wide trope of crime and mystery fiction that I've dipped into occasionally, but more often than not steered clear of. I don't know whether I subconsciously equate books from this part of the world with snow, ice, cold and isolation and I avoid it as a result. I'd rather be hot than cold! 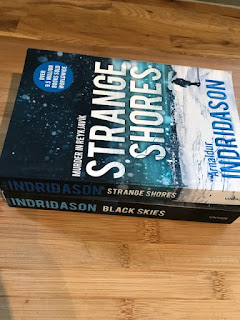 These two are the 8th and 9th entries in his Inspector Erlendur series (11 in total to date).
I've read a couple years ago and enjoyed them - The Draining Lake in 2013 and Jar City I think before that - and hold lofty ambitions of one day completing the series. Don't hold your breath though ....
The full Erlendur series is... 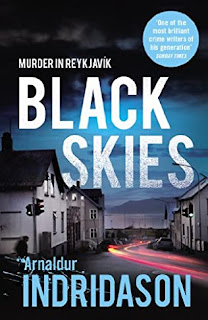 A man is making a crude leather mask with slits for eyes and mouth, and an iron spike fixed in the middle of the forehead. It is a 'death mask', once used by Icelandic farmers to slaughter calves. He has revenge in mind. Meanwhile, with Detective Erlendur absent, his baseball-loving colleague Sigurdur Oli is in the spotlight. A school reunion has left Sigurdur Oli dissatisfied with life in the police force. Iceland is enjoying an economic boom and young tycoons are busy partying with the international jet set. In contrast, Sigurdur Oli's relationship is on the rocks and soon even his position in the CID is compromised: when he agrees to visit a couple of blackmailers as a favour to a friend he walks in just as a woman is beaten unconscious. When she dies, Sigurdur Oli has a murder investigation on his hands. The evidence leads to debt collectors, extortionists, swinging parties. But when a chance link connects these enquiries to the activities of a group of young bankers, Sigurdur Oli finds himself investigating the very elite he had envied. Moving from the villas of Reykjavik's banking elite to a sordid basement flat, "Black Skies" is a superb story of greed, pride and murder from one of Europe's most successful crime writers. 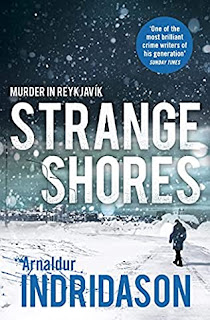 "Arnaldur Indridason is already an international literary phenom—and it's easy to see why. His novels are gripping, authentic, haunting, and lyrical. I can't wait for the next."—Harlan Coben

The preceding description of Arnaldur Indridason's crime novels is right on target—Indridason's beloved series detective Inspector Erlendur has captured the imaginations of suspense fiction readers all over the globe. Published now in 26 countries around the world, Inspector Erlendur joins Maigret, Morse, Wallander, and a handful of other world-famous policemen who provide must-reading for suspense fans everywhere.

In this latest puzzle Inspector Erlendur learns of the baffling story of Matthildur, a local woman who went missing years earlier on the night of a violent storm. A frequent visitor to his birthplace, Erlendur has spent his whole life searching for his brother Beggi who was lost in a snowstorm when they were both children. As he begins to ask questions about the fateful evening when Matthildur disappeared, Erlendur begins to suspect what may have also befallen his long-lost brother.

Can Erlendur possibly solve the disappearances of Matthildur, and Beggi, after all these decades? Or are the forces that want him to stop investigating stronger than he is?

Indridason's fans will race to discover the truth behind one of the most memorable endings in modern crime fiction.