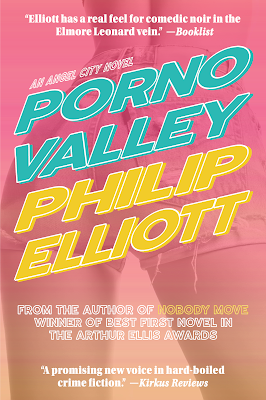 Synopsis/blurb ...
“Nobody knows Los Angeles until they’ve been entranced by it, corrupted by it, cast out from it, and returned to it on their knees begging it to save them, and Richie knew Los Angeles. He knew it better than anyone. This time he would tame the beast and make it his own—this time he would win.”
It’s the year 2000 and 78-year-old Mickey O’Rourke has been a Los Angeles PI for a very long time. He’d thought he’d seen it all until the disappearance of porn star Jeffrey Strokes sends him from the sex-filled studios of the San Fernando Valley to the desperate streets of Compton where Mickey’s final case becomes his biggest test.
Flash back to 1998 and struggling hair salon employee Jemeka Johnson, suspecting boyfriend Ray-Ray of infidelity, follows him one night from their East Compton home to what turns out to be a drug deal gone sour where a twist of fate finds Jemeka tossed onto a dark and dangerous path—one that offers huge reward for someone bold enough to seize it.
Meanwhile, in 1999, tired of robbing small-town diners and shooting bad dope in filthy motel rooms, newlyweds Richie and Alabama return to LA in search of the perfect score.
Paths cross and past meets present as bad decisions hurtle toward worse consequences—and no one will ever be the same.
Porno Valley is a fantastic second novel from Philip Elliott which more than matches up to his superb debut, Nobody Move.
Here the stories of three sets of characters intertwine and collide in a spicy tale set around the end of the nineties.
LA ... a couple of grifting drug addicts with petty crimes to commit to support a spiralling habit, a geriatric widowed PI on his last case, a porn studio and some of its stars - missing and present, and an insecure hairdresser who loves but doesn't quite trust her man - cross paths explosively. Philip Elliott pulls the pin on the grenade and lets his characters loose on the world and each other, with events unfolding over the period of a couple of years.
Around a back drop of a missing person case, drug use, dealing, hairdressing and the adult film world, essentially we have relationship dramas fuelled by love, loss, infidelity, trust, disappointment, ambition, a struggle for survival, desperation, fear, jealousy, desire, greed, and a search for truth and peace.
Our conflicts result in violence and death. All the lives of our players are changed irrevocably during the course of the narrative.
I absolutely loved this one. I don't think I've warmed to a character such as Mickey O'Rourke in a long time. Mickey, on his last job seeks a missing porn star to a client he almost comes to regard as a daughter. There's an innate decency in the man that oozes from his every pore and bursts from the page into this reader's heart. He's brave, honest, careful, diligent and dogged. There's also a sense of melancholy about him as he bears the loss of his wife, his life partner and true love stoically. He's ready to be with her again, but is in no particular rush to join her. He's making the best of things in an imperfect unjust world.
In the lives of our other characters, we plumb the depths of addiction and its consequences - poor choices, impulsive decision making, ever wilder criminal schemes and an inevitable outcome. Love did not come close to conquering all. We also see the pain of poverty, debt and insecurity and the obsessional, irrational lengths to which one person will go to for their own slice of the American dream.
Every character in the book had a tale to tell. Each one felt alive. The relaying of their stories, separate at the beginning but increasingly woven together and twisted and tangled was dazzling. There's a kicker at the end. One which I did glimpse just before it came, but even that kind of blind-sided me to a degree.